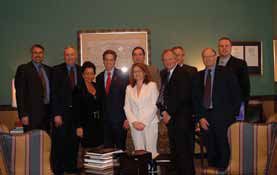 Two years ago, Eric Sheninger was no fan of social media. “Like most principals, I felt that YouTube, Facebook, and Twitter had no place in education and were a distraction from learning,” says the principal of New Jersey’s New Milford High School. Then Sheninger read an article about Twitter and learned that it let people send free messages to anyone. “I thought, What a great way to get information to my stakeholders!”

He began tweeting about student achievements, meeting times, schedule changes, and athletic events and found a vibrant community of educators in the Twittersphere. “As I watched my colleagues, I had an epiphany: Why was I restricting the use of these wonderful tools and depriving my students of an education that would prepare them for the world?”

Eventually, Sheninger dedicated one Twitter account to high school and created another for professional learning. Soon the National Association of Secondary School Principals came calling. “They’d noticed my professionallearning tweets. I had 8,000 followers; they had 1,000.” The NASSP is now collaborating with Sheninger to show other school leaders how social media and Web 2.0 tools can be integrated into schools and how principals can use them to promote their schools, enhance communication, engage students, and explore opportunities.

In the past few years, national and state school administrator associations have stepped up to help their members, especially superintendents, understand and expand the role of technology in district operations. They have assumed this responsibility in many ways, from sponsoring tech-focused seminars to offering online professional development.

“We’re engaged in helping our members take full advantage of technology on a number of levels,” says Dan Domenech, executive director of the American Association of School Administrators. “First and foremost we focus on how technology can be an effective tool to supplement instruction.” AASA’s summer 2009 leadership conference was dedicated to technology. Recently the organization asked Alan November to lead a series of technology events.

With the encouragement of the Minnesota Association of School Administrators, the state’s superintendents meet regionally to discuss ways to significantly change the way learning is delivered to students, including promoting online learning and converting textbook budgets into large-scale purchases of iPads.

“We do more than just propose the belief,” Domenech says. “We’re engaged in a full-scale professional-development strategy for our members and are supportive of technology as a communication, public relations, publishing, and marketing tool.” AASA uses Twitter, blogs, and Facebook and is helping members figure out how to handle cyberbullying and sexting without shutting the door on technology’s benefits.

In a practice-what-you-preach move, AASA held a Webinar for the governing board in March 2011 during which the board reviewed the budget and voted on it electronically. “When we begin to model some of these things, others try them as well,” says C.J. Reid, associate executive director of governance, membership, and affiliate services. This fall AASA will hold its executive committee meeting electronically. The meeting will be recorded and posted online for anyone who misses it, and Reid estimates a savings of at least $25,000 by doing this.

Reid has noticed a large number of AASA’s 49 state affiliates tweeting about meetings with governors and posting updates on Facebook. “Most of our organizations are advocacy oriented,” he says. “If you can let members know in real time what you’re doing for them, it enhances the value and reminds them of why they want to belong [to an association]. Technology allows us to do that in a way that wasn’t possible before.”

Social-networking tools have allowed Sheninger to connect with companies and educators. He’s working with the NASSP and the New Jersey Principals and Supervisors Association to educate administrators about using Web 2.0 tools effectively. “We’re dealing with the preconceived notions about Facebook, YouTube, and the rest and helping them figure out how to find a balance,” he says.

Organizations like NASSP and NJPS A understand the ways social media can help administrators network, Sheninger says. Through these groups he connects with other principals, with whom he has engaging online discussions. On a jog at a conference earlier this year, he and a principal from Ohio decided to hold a joint student-government meeting over Skype.

Since the late 1990s, the Wisconsin Association of School District Administrators has held workshops on computer instruction for its members. It also started the School Leaders Advancing Leading Technology in Education (SL ATE ) conference, which had more than 800 attendees last year.

Sheninger (in green) collaborates with other administrators at the 2011 Google Academy for Administrators in San Antonio, Texas.

“We’ve believed for a long time that operations and technology are the keys to making public schools more efficient and effective,” says Miles Turner, executive director. Seven years ago, Turner’s office went paper-free. Everything, including registration, newsletters, e-blasts, information, and video blasts, is on the Web site, which also has an archive of hundreds of professional-development videos.

WASD A’s members appreciate the focus on technology, Turner says. “Our members would say we’ve pushed them to learn about technology,” he adds. “I know I need to have the latest products at my fingertips so I can demonstrate that we believe in it. I just did a presentation to 40 superintendents in northern Wisconsin using my iPad 2.”

The National Association of Secondary School Principals, the group that works with Sheninger, has featured a strand dedicated to technology leadership at its last three annual conferences. The association has also invited principals and others to present on all the major tech topics. “When I launched the strand, in 2007 or 2008, we did not have a huge response,” says Bob Farrace, senior director of communications and development. “But at our national conference this February, the room was full for a lot of those sessions. There is an appetite for learning about social media, instructional technology, and how principals can use it for their own work.”

NASSP has a fairly strong socialmedia presence; the number of followers of its Twitter account doubled, to 2,500, over the past year. The association is converting its resources to an online platform on which members can take courses virtually and network. “We have robust online communities,” says Farrace, who has watched these groups grow since their debut, in 2002. “We just passed 1,000 members for our school-leadership network and have smaller communities dedicated to teacher evaluation and other topics on edWeb.net.”

NASSP has to encourage principals to make networking and outreach a priority, Farrace says. “They are discovering that it’s not ‘one more thing to do,’” he continues, “and once they see what’s out there, they are hooked. Today we have principals who use Twitter as a primary means of professional development, sharing resources, and connecting.”

NASSP is developing courses that will help educators learn how to begin integrating mobile and social technology at their schools. “We see the potential for what technology can do,” Farrace says, “and we want our folks to be a part of it and embrace it with an eye to improving learning.”

Charlie Kyte, executive director of the Minnesota Association of School Administrators, has also pushed to increase technology use in his state. A few years back he began doing audio podcasts, then upped the ante to video podcasts. Every week or two, Kyte creates a legislative report or an on-the-road blog and records it to video and audio. His staff emails it, with a video attachment, to MASA members, education lobbyists, the governor, legislators, and the media. Because of Kyte, a number of Minnesota superintendents are generating video and audio blogs regularly, and Kyte recently decided to hold an online course on how to produce video and audio blogs. As soon as he announced it, 20 people signed up.

Like Kyte, Sheninger believes we need to help people appreciate technology’s value. “I thought that simply having the technology meant I was tech savvy, but I’ve learned that if I want my staff to embrace technology, see its value, and be inspired, I have to be modeling it, and on the front line,” he says.

How do we get more administrators to want to create these kinds of environments? The first step, Sheninger says, is to give up control and change the way you communicate. “The role of state organizations is to provide more relevant professional development from practitioners. That’s the most powerful way to initiate change. I’ve learned from people using the tools, in the trenches, and now people are learning from me. The best way to learn is from our colleagues.”

Back-office business: How Schools GET IT DONE

Challenge: A high school in Texas wanted to expand its videoproduction courses to include high definition.

Solution: The school purchased 90 Hitachi CP-DW10N 3LCD projectors, and every classroom received one. One of the projectors’ most useful features, according to a technician at CRLS, is the audio pass-through function, which lets you listen to audio through external speakers.

Challenge: For the past five years, Santa Rosa County School District in Milton, Florida, has worked to integrate digital content into the curriculum more fully.

Solution: The district expanded its relationship with Discovery Education, taking advantage of the company’s curriculum-alignment services. In the next four years, Discovery Education will embed digital content from streaming Plus and its science modules into curriculum guides for math, science, English-language arts, and the Common Core State Standards. Teachers will receive professional development and be able to launch digital content aligned to state standards just by clicking.