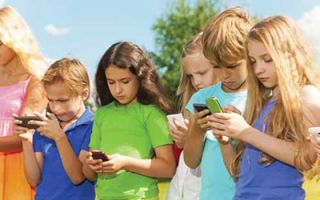 A recent Vox article reports that texting has become the dominant form of communication among teens, which has led to concerns that “textisms” (i.e., the informal grammar used in texts) will impact kids’ use of proper grammar. Yet recent evidence shows that these concerns are unfounded.

Nenagh Kemp, a language psychologist at the University of Tasmania, recently published a study on texting with Clare Wood of Coventry University in the UK. The study included 83 primary school students, 78 secondary school (middle and high school) students, and 49 college students. The students copied down the texts they sent in the past two days, and these texts were then analyzed for the density of various types of textisms. The study concluded that among children and teens, there is actually a slight correlation between textism usage and increases in test scores.

Earlier studies show similar results. One study, published in 2008, showed that 11- and 12-yearold students in Britain who used more textisms (including misspelled words, grammatically incorrect substitutions such as “2” for “to”, incorrect verb forms, or missing punctuation) compared to writing with proper grammar tended to have better scores on grammar and writing tests, as well as better spelling in general (after controlling for test scores in other subjects). A follow-up study in 2009 looked at 88 kids between 10 and 12 years old—again, the researchers found similar associations between high textism use and better reading ability.

Kemp suggests that texting, rather than detracting from students’ literacy levels, “seems to represent the addition of an extra literacy skill—the ability to represent, in writing, what they would have said if they were speaking.” It’s possible that experimentation with language (and knowing the difference between textisms and proper grammar) increases overall fluency, and improves writing and reading skills.