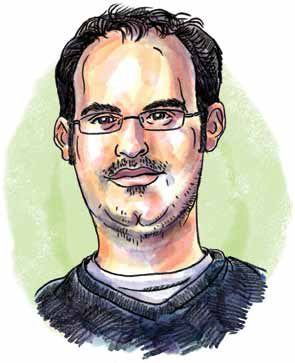 Some have been working in education for decades, before there was a Web or Twitter or tablets. Others have appeared on the edtech scene far more recently but are making just as many waves. All of them are making a lasting impact on the future of U.S. schools.
Reported by Holly Aguirre • Illustrations by Jay Bevenour

Call it Facebook for Educators. Edmodo co-founder, Nic Borg, found his “aha!” moment while building Web applications at Kaneland High School in Maple Park, Ill., in 2007, when he noticed so many digital tools in the classroom going unused. “They weren’t really addressing some of the pain points that teachers were having,” says Borg. “We (he and co-founder Jeff O’Hara) took a novel approach to the space that had been used quite a bit outside of K-12 and built products that teachers really wanted to use and solve real problems.”

Teachers can sign in and use the free service to accomplish pretty much anything they need to work—post assignments, create polls, embed video clips, create learning groups, etc. While most learning management systems offer similar features and functions (for a price), Edmodo took it straight to the teachers. The plan worked. Over 34 million users use Edmodo and the platform is available in English, Spanish, Portuguese, German, Greek, French, Turkish, Dutch and Chinese. “We see tremendous value going forward in this really large network that we built from the standpoint of teachers having this vastly improved interactive workspace, because it’s ultimately all about empowering the teachers with the tools they need,” says Borg.

When he signed on as Chief Information Officer for the Los Angeles Unified School District in 2010, Ron Chandler knew he was in for a big job. But even he couldn’t fathom what a big deal it had become. “What we were doing was similar to what other school districts across the country were doing,” says Chandler. “We just did it on a much larger scale. Our students deserve the best technology just as much as the next student regardless of their home zip code.”

One of the things they did was initiate the pilot phase of the largest 1:1 initiative ever attempted (650,000), uncovering some issues (as expected in a pilot) that warranted the delay of the “take home” component of the distribution of the iPads. With continued rollout (and continued criticism), approximately 100,000 iPads have been deployed in the second phase. Chandler, who for many years advised various corporate CxOs while working at powerhouses such as Andersen Consulting and Price Waterhouse Coopers, now wrangles 600 IT employees and specialists in more than 1,100 schools. “We took a few hand slaps, but it helped us realize that we needed a more robust proactive communication strategy before we go to subsequent phases,” says Chandler.

One thing everyone can agree on—the LAUSD experience has generated plenty of lessons learned for any district attempting such a massive transformation.

Haven’t heard of the Maker Movement? Let us be the first to introduce you to its grandfather. Dougherty, founder of Make Magazine and Maker Faire (the world’s largest DIY event) believes that inside each one of us is the ability to create and he challenges educators and parents alike to facilitate the creative mind in all school-aged kids. “Encouraging children to be part of the learning process has been so very rewarding to me,” says Dougherty. “We have to take the lead as parents to make sure that our children and all children have the opportunity to develop as makers. I want to see a makerspace in every school and library—everywhere.”

Dougherty was a co-founder of O’Reilly Media, where he was the first editor of their computing trade books, and developed GNN in 1993, which was the first commercial Web site. He also coined the phrase “Web 2.0” in 1993. His Maker Education Initiative (Maker Ed) uses outreach strategies that harness community-school resources in an effort to ensure that disadvantaged youth have access to making opportunities. Combine Dougherty’s philosophy with emerging technologies such as 3D printing and design software, robotics, and other new manufacturing techniques, and get ready for a maker in every school near you.

How would you like to wake each morning with this at the top of the to-do list: Create and extend computing technology to connect and enrich the lives of every person on earth? Oh, and do it in the next six years.

As the Director of Strategy and Marketing at Intel Education, Lento is tasked with fulfilling this mission of the $52.7 billion company, at least when it comes to education. This means the management of dozens of worldwide initiatives—from classroom programs focused on STEM and the education of girls, to professional development resources that have trained 10 million teachers in 70 countries and 35 languages, to contests and grants, such as the International Science Fair and the Student Science Search. “One thing I have discovered that is universal—whether you’re a teacher, a parent, a policymaker —you care about the kids,” says Lento. “That is the common goal that we all share. It’s about the students and about us helping them be successful in the world they live in today.”

And while, of course, Lento wouldn’t mind seeing you use Intel technology to pursue this goal, odds are you are probably already using it anyway. Or will be in six years.

Ray’s selection did not happen just because she has been hanging out with President Obama, who identified Metropolitan Nashville Public Schools’ (MNPS) McGavock High School as a model in his most recent State of the Union address. And it’s not just because she took the helm as president of the International Society for Technology in Education (ISTE) board in 2013.

Ray, who was a participant in Tennessee’s first distance learning network in 1993, has been making her mark for a long time. In her current position as the district’s first Executive Director of Learning Technology, she continues to create some of the most innovative learning spaces in this country. “The goal for our technology learning plan is to have a device for every child and be fully blended, wall-to-wall, at the end of the three years.”

The district is now redefining the role of the librarian, bringing in a team of certified instructional designers to provide training and support so they become versed in instructional design methodology. “We are pretty convinced that it is easier to implement Common Core when you have a great librarian to support the supplemental aspects of the curriculum within the core,” says Ray. We’re pretty convinced the POTUS will agree.

South by Southwest—the coolest annual festival for film, music, and interactive technologies—now has an unlikely cousin thanks to SXSWedu Executive Producer Ron Reed. In just four years, his team has created an event attended by a growing community of teachers and administrators from K-12 and higher education along with entrepreneurs, CEOs, policy makers and other stakeholders who are passionate about improving education. “The diversity of our community is what makes SXSWedu special,” says Reed. “While a common goal of modernizing teaching and learning prevails, there’s a rich variety of perspectives and opinions about how to actually do so. The result is a fun, collaborative and supportive mash up of education innovators.”

Since SXSWedu launched in 2011, attendance has grown significantly each year with conference and festival programming that spans from sessions, workshops, featured and keynote speakers, to an edtech entrepreneurs competition, makerspace, film screenings, and more. SXSWedu has hosted a variety of prominent speakers including several past Tech & Learning Most Influential awardees such as Jaime Casap, chief education evangelist, Google, Inc., Anant Agarwal, founder and president of edX, Coursera Co-Founder Andrew Ng, Amplify CEO Joel Klein, and even Bill Gates. With that kind of company, expect Reed’s SXSWedu to become even more popular.

As president of the 1.5 million-member American Federation of Teachers, AFL-CIO, Randi Weingarten wears her influence on her sleeve. In her long career representing the nation’s teachers, she has been either a bulwark or an obstacle, depending on where you stand on the political hot potatoes of big data, standardized testing, and teacher assessment in education. Last year she had this to say about the data warehousing initiative called inBloom: “Any potential inBloom has to improve and personalize learning is being overshadowed by a growing lack of public trust in its early communications and operations, and genuine concerns about the security, privacy, sharing, and exploitation of data.” This year? inBloom is gone.

Politics aside, Weingarten seems firmly in the pro-technology camp. She helped launch ShareMyLesson.com, a free online lesson-sharing resource made available to teachers, students and parents. It now boasts 500,000 registered users, and 300,000 pieces of data, of which 31,000 are aligned to Common Core. There have been over 6,000,000 downloads by teachers all over the country. “Educators are so isolated most of the time, and they want to collaborate and they want to share. This is a vehicle by which they can do that,” says Weingarten. Easy to believe people are listening.

If E-Rate 2.0 is going to happen, this is the man who will drive it. The Chairman of the Federal Communications Commission presides over a proposed $4.4 billion budget to support broadband networks in US schools and libraries— a doubling of investment that will connect 20 million students in at least 15,000 schools to high-speed Internet access.

Appointed to the position by President Obama in November, 2013, Wheeler, a former cable-industry lobbyist and venture capitalist, has made strong talking points about improved bandwidth to schools. “There may be no bigger and more significant issue than making sure our schools and libraries are connected to high-speed broadband networks,” Wheeler says. “That is why E-Rate modernization is at the top of my agenda.”

Skeptics worry, however, that Wheeler’s Net Neutrality proposal, which would enable commercial Internet service providers to offer “paid prioritization,” could put schools back into the Internet’s slow lane. Politics aside, Wheeler seems intent on modernizing the largest federal edtech program. “Here’s the point,” says Wheeler, “the nature of educational connectivity has changed dramatically over the life of E-Rate. How E-Rate funds are distributed, however, has not. We are in the midst of a rule-making to address and correct that reality.”

As president of the Alliance for Excellent Education and co-founder of the 2010 Digital Learning Council with Gov. Bush, Wise has been a loud proponent for the use of technology and data in the classroom. Since its founding, both inside-the-beltway and outside-the- beltway organizations have been instrumental in lobbying for issues such as student qualifications for digital learning, access to high-quality digital content and instruction, blended learning, funding models, assessments, and accountability. “I think the tipping point has been reached and that we are fast moving to where every one of the nation’s school districts is having to make critical decisions in the next couple of years about how to use technology and what types of technology to use,” says Gov. Wise. “It’s not a question of “if “anymore; it’s a question of how and when and what.” Gov. Wise is currently leading the Alliance’s “Project 24,” a new initiative to help school districts plan and effectively use technology and digital learning. Hundreds of school districts and their leaders— representing nearly 10 million students across the country—are participating. Gov. Bush has been comparatively quiet of late but still earns a spot on the list because of his expected 2016 run for the most influential job on the planet.