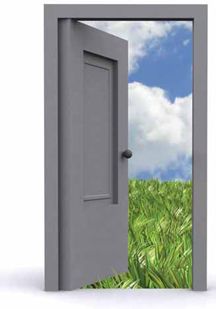 While the phrase “school portal” may sound as dated as “information superhighway” or even “Don’t copy that floppy,” in fact the idea is finally becoming an effective solution for schools. Many districts and states now are taking Web sites to the next level by developing portals that have customized content for teachers, students, and parents. The vision: engage students with Facebook-like tools, help teachers with enriched curriculum resources, and enlist parents as partners with real-time data on their children’s academic progress.

Accessible by user name and password, school portals typically give students and parents access to assignments and grades, and sometimes standardized-test scores. They also usually include a class calendar, discussion forums, and personal Facebook-like student pages.

That’s just for starters. The latest portal buzzwords, according to Kevin McGuire, technology director for Michigan City, Indiana, schools and a former state tech director of the year, are personal learning plans, social networking, and portable student portfolios, which children can take with them when they leave.

“It’s all about communication,” McGuire says. “Too often, parents wait too long [to contact the school] and can’t believe that their children won’t be graduating. We realized that nine-week report cards aren’t frequent enough. And we want to give parents access to the information to help the students succeed.” Michigan City’s portal, which has been in the works for a number of years, already gives parents and teachers access to standardized-test scores, grades, attendance, and discipline records; students will receive access to all the data in the fall.

An unusual feature of the portal is the personal learning plan, in which individual students set their own goals for the year and work with their teachers on their progress during that year. “PLPs are a way for us to know how students feel about learning,” McGuire says. “And we’re starting to use them to help students stay on the path.” Begun in a few middle schools and used in an after-school remedial program, PLPs will ultimately be rolled out K–12, system-wide, and students will update their plans every year.

A second component of Michigan City’s portal is the individual student portfolio, a multimedia repository that colleges are increasingly requiring for admission. Currently visible only to the student creators, these portable portfolios should be accessible for public display by the fall, McGuire says.

The final component of the district’s plan is secure social networking, which is intended to enable students to email one another and ask their teachers for help in a safe environment that can be managed and monitored by the district. The networking piece and other fine-tuning should be completed next spring, according to McGuire, who adds that the portal was built on Drupal, an opensource content-management application, and was not a costly project.

Meanwhile, the Corpus Christi (Texas) ISD rolled out a school portal running on a customized version of eChalk software districtwide in 2008. As with Michigan City, a key Corpus Christi goal is improving communication and keeping parents informed about their children’s progress, according to Lyndall Gathright, the district Webmaster. The portal recently began allowing parents to see what the teacher assigns, the due date, and a student’s grade for the assignment as soon as they are posted. Any parent with Internet access can get an up-to-date status report on homework at any time and is thus empowered to help their children with current assignments or prod them on overdue ones.

In a recent study of portal usage, Corpus Christi was encouraged to find that 75 percent of its teachers had implemented all 12 features the district recommended for driving traffic to their class pages. The study also found that 98 percent of all teachers are using the portal and that 79 percent of all K–12 students are registered users. In addition, students sent an average of three emails apiece via the portal, and the volume was much higher in the upper grades.

Although there is no quantifiable evidence that the portal has improved learning, Gathright says, parents and teachers feel that it fosters a partnership between parents and students concerning school and that it encourages responsibility. Corpus Christi is looking for ways to expand Web 2.0 functions like networking and blogging throughout more schools in the district and to encourage learning 24/7, inside and outside the classroom.

Loomis Chaffee, a Connecticut coed boarding school, was prompted to add a portal to its Web site last year primarily for administrative efficiency, according to Cassandra Corrigan, database administrator. The school needed to consolidate its data so that a single change, such as a new phone number, would be reflected throughout the system. From the perspective of the user, says Mary Forrester, Loomis Chaffee’s Webmaster and director of public information, the school also wanted to create a single entry point where students and other visitors could find whatever they needed, from daily updates on school activities to conference- room availability to class assignments, dorm news, and email.

Using FinalSite’s content-management tools and templates, the school built the portal in five and a half months, less than half the estimated time, linked it to the student-information system, and went live with the teacher and student portals last September. The parent portal had been completed the previous spring.

First-year results have been positive and have included extended learning, increased efficiency, and improved communication. The class pages, for example, have discussion threads and show alerts when new data are posted. And teachers can email the class and/or their parents with a single click and issue periodic progress reports electronically. This is helpful especially since many of the reports are quite lengthy and nearly 10 percent of the parents are international.

In addition, the portal builds a sense of community with its daily bulletin, dorm photos, club pages, and athletic coverage, which includes the latest game results, directions to upcoming away games, and updated team rosters. And it helps the day students (45 percent of Loomis Chaffee’s 681 students are commuters) feel more connected to the school community.

This year has been one of transition, Corrigan says, and there are more enhancements ahead, but generally speaking, the portal has helped teachers improve classes and foster discussion and has increased administrative efficiency. And students are becoming more familiar with portal tools, which function the same way from subject to subject.

A Michigan City High School student looking at her PLP (Personal Learning Plans) page with her individual learning goals in the school portal.

Finally, no discussion of school portals would be complete without mention of the Texas Education Agency’s ambitious Project Share, a new state education portal. According to Anita Givens, the agency’s associate commissioner of standards and programs, the goal of the portal is to improve education two ways: first, by giving teachers a united online resource and community for professional development; and second, by providing exceptional curriculum enrichment resources through partnerships with the New York Times Knowledge Network, the Smithsonian Institution, and the National Aeronautics and Space Administration.

The New York Times network will give teachers accounts of current events dating back to 1851, and the other partnerships will take science to a new level with online simulations and audio and video discussions with working scientists. Ultimately, Givens says, the portal will link to student-information systems statewide and be a resource for all individual districts, starting with a few pilots in the fall and phased in over the following 18 to 24 months. Individual districts are welcome to deploy as little or as much Web 2.0 functionality (student and parent log-ins, calendars, email, etc.) as they wish.

“Project Share will be done as a distributed model, from the ground up,” Givens says. “Local school districts may have any number of plans for engaging parents and students. But it’s not the state’s job to do it. Not with 4.8 million students, 1,265 school districts, and more than 4,000 educators.”

There is one portion of you school population who won’t balk at the idea of portals: your students. A recent survey from National Speak Up Day (www.tomorrow.org/speakup/), as presented by David Jakes at Chicago Tech Forum 2010, confirms that when it comes to communication and collaboration online, they are all in. Here is what students surveyed say they want:

¦ Social-based learning: Students want to leverage emerging communications and collaboration tools to create and personalize networks of experts to inform their education experience.

¦ Digitally-rich learning: Students see the use of relevancy-based digital tools, content, and resources as a key to driving learning productivity, and not just about engaging students in learning.