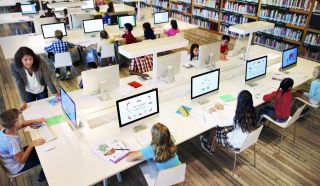 With more than $3 billion spent on ed tech products last year and more than 2,500 programs on the market, educators across the country need to know which products are likely to make a difference in teaching and learning. In a research study into this issue, Dr. Ryan S. Baker, Director of the Penn Center for Learning Analytics focused on what aggregate data can tell us about the programs we use and how effective the apps we use for math, ELA and science are.

Join us for What Ed Tech Apps Work Best for Learning?

He used aggregate data from BrightBytes Learning Outcomes module to learn what programs students are using, how much they’re using them, and how the investment in programs correlates to improved student learning.

After looking across 48 school districts with 392,603 learners using 258 apps, he found that there was sufficient test data to analyze student improvement for 177 of these apps. He focused only on 150 apps used by learners that were used for a total of 1.48 million hours.

The team focused their efforts in three areas: adoption, engagement, and impact. Each plays a role in understanding the overall effectiveness and financial sustainability of apps that students are using.

Results of the Study

1.8 million licenses were purchased. The average number of licenses per student was 5.02. When a district purchases licenses, it is typically with the expectation (or at least hope) that they will be widely used.

However, the study showed that not all licenses are used. License use varies by app, and there is a range of unused licenses. The study also looked at licenses that were employed in classrooms but not used intensively. There was a wide range in the degree of adoption of different apps and limited overlap between the apps with the largest number of licenses purchased and the largest number of intensive users.

Impact on Math and ELA Learning

While there were fewer apps and fewer assessments available for the study in science, correlations existed between the time and number of days certain apps were used and test improvement. Apps also had geographic variation for where they were most effective.

General data on use is valuable but even more relevant is an analysis of what apps were most widely adopted, used, used intensively, and were successful in promoting student learning in math, ELA, and science.

Read the previous entries in this blog series:

How Effective for learning are the Ed Tech Apps we Use?

As the costs for devices and applications decrease, technology use is increasing In classrooms across the country. Growth is particularly high in web-based devices. Read more.

How Good is our Return on Learning for Classroom Apps?

School districts across the country spent more than $3 billion on ed tech products last year and chose from an assortment of 2,500 apps on the market. With so much money at stake and so many choices, educators need to know which products have a positive impact on student outcomes and the conditions under which impact is the greatest. Read more.