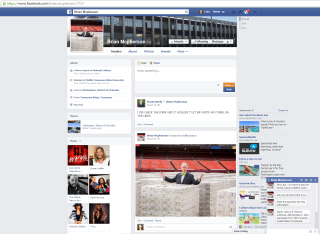 This week a relative of mine, who is a senior citizen, friend-requested me on Facebook. Not only do I love to see more and more seniors connecting online, I also love that this provides further opportunity for generations to share their lives. Especially these days when families tend to have busy lives and be spread out.

The relative was a cousin who I don’t see much beyond big family gatherings like weddings and funerals. The next day she messaged me. Nice! She was catching on quickly. We had the usual pleasantries. She asked how the family was in Vegas and said she had been there recently but unfortunately hadn't had time to visit. I gave her the update on my Dad's birthday party and also shared that things at work and home were very well and shared a couple pictures of my pups.

I was impressed at how she jumped right in. Bravo! Then she said she had been trying to reach me about something.

She asked if I ever played games on Facebook, (Who doesn't right?). Well actually I don't. She said she doesn't either but there was this site that takes Facebook profile names and enters them in a contest. She was excited because she had won and they delivered cash right to her door. Uh. Ok. That is weird. But I congratulated her.

She said she was trying to reach me, because she saw my name on the list of winners.

I explained it must be someone who shares the same name as I have never entered a contest. And, now I'm thinking, "What the hell?" This clearly isn’t my cousin, but who is it and who else has this impostor reached out to?

I click on the profile to verify who had contacted me. It was my cousin. It was her picture, jobs, schools, and we had a few mutual friends/relatives. I went to see when her profile was created. A-ha! Just a couple days ago. But then again, she was new on Facebook, from what I thought, so maybe that wasn't an issue.

I did not happen to have any contact info for my cousin or I would have reached out directly, however, I searched some more and found a duplicate Facebook profile from my cousin. On her timeline she says not to answer any communication from her as she got hacked.

The reality is that she did not get hacked. Instead, someone just copied her account. Profile pictures, jobs, education, etc. Interesting. That would not take very long to do. Probably about 15 - 20 minutes or so. If the person does not frequently interact with others on Facebook (as was the case with this relative) it also wouldn’t be surprising that folks didn’t even remember they were already friends with her.

At this point I go back to the fake cousin and ask her to tell me more about this list I am on. She is getting mad. She is telling me to just friend request and message a man named Brian Mcpherson on Facebook from the National Lottery Administration who has the list of winners.

I'm interested to see how the scam plays out and contact him. He asks for my full name and number. He messages me a congratulations informing me I am a winner! Then he sends me a form to fill out with lots of personal information. I fill it out with lots of fake information. Now he does what’s expected. He tells me I only have to pay $2000 to get the $100,000 I have won (see the message in the screenshot below). Yipee!

My hope is that they would not see this as a sign to shy away from social media. Shying away does not empower anyone and does not teach how to be discerning when encountering individuals. However, the lesson to be discerning, does not only apply to online interactions. I have personally encountered (and imprisoned) an impostor that I became close to face-to-face. Scam artists and those with double lives are everywhere.

I agree with Will Richardson’s belief that we want our children meeting strangers on the internet (see # 11), but how are we preparing our students to know if the person they thought they knew is really who they say they are? What lessons are we teaching them? What safeguards are Facebook (and other services) putting in place when scammers duplicate a profile? Do those who are contacted know how and when to get the authorities involved? Are you sure you know if your students would be prepared to handle such a situation?