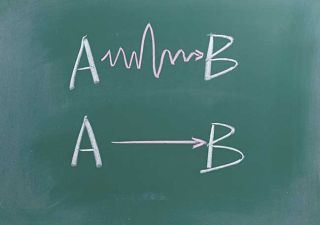 This article was inspired by my attendance at a conference called ResearchEd. A particular beef of mine is that many ideas in education are completely devoid of evidence that they actually work. I have long believed that many ideas work because, consciously or unconsciously, teachers and school leaders make them work. So, is there a "magic bullet" that can guarantee success? Sadly, there isn't. But we can learn from psychologists in order to give ourselves a head start!

So, you have a great idea to try out with your class. The idea could be original to you, or it may be one that you've borrowed, like flipped learning or peer mentoring. But will it work?

Fortunately, you're in luck: there's a good chance that it will be successful, as long as you think it will. The reason for this is what has become known as the experimenter effect. It works like this: there is evidence to suggest that if you try an experiment and are told that it will work in a particular way, you will give off subtle cues in your voice and body language to help guarantee that outcome.

I believe, from my own experience and also from having looked at many teachers over the years, that the same thing applies even if you are both the experimenter and the one telling yourself that it will be successful.

We all know great teachers who can make a lesson fly with nothing more than a box of paper clips. That's probably at least partly because they really believe that they can do that, and partly because their enthusiasm and "can do" attitude brushes off on the kids.

Now, there's a really good thing about this and also a warning signal. The good thing is that if you want a new approach to work, then if you actually believe it will and can also enthuse the kids, then it probably will.

The note of caution comes from the fact that if you have come across the experimental new approach (or new device or initiative or whatever it happens to be) being used successfully, you cannot assume that the reason for the success is intrinsic to the thing itself. To put this another way, teacher X may give all her students a Chromebook, with startling results on their grades. Teacher Y, working in a similar kind of school with similar kids, may do exactly the same and achieve very mediocre results.

The success or lack of it depends partly on the device, in the sense that kids are limited in what they can do by the device, so the more flexible and powerful the device the better. But it also depends on how the teacher uses the device and, if the experimenter effect is to be believed, the degree to which the teacher thinks the device will be successful and how far her expectations rub off on her students.

In other words, while you may feel that the new device, approach or initiative is necessary, it is not sufficient.

The other effect it's good to know about is the Hawthorne Effect. The managers at the Hawthorne factory wondered whether lighting levels would affect productivity, so they brought in some people to play around with it. They found that when they increased the lighting level, ie made the place brighter, productivity went up. No big surprises there.

But then they discovered that if they lowered the lighting, productivity continued to rise. Some people have explained this by saying it was because the workers knew they were being observed. A more compelling explanation in my opinion is that, unusually, the workers were being consulted about what was going to be done.

It seems to me that knowing about these two effects is crucial for increasing the probability that a new initiative will succeed. The experimenter effect suggests that you would be better off giving the responsibility for it to someone who believes it will succeed. If, instead, you passed it to someone who has grave doubts, then their views could become a self-fulfilling prophecy.

The Hawthorne Effect suggests that initiatives will more likely succeed if you discuss them with the people who will be implementing them (your colleagues) and those who will be subject to them (the kids).

Obviously, making use of your knowledge of these two effects will not guarantee success – but it will almost certainly help!

Terry Freedman is an independent educational ICT and Computing consultant in England. He publishes the ICT in Education website at www.ictineducation.org.