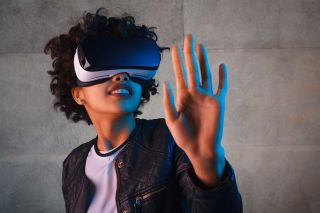 Two and a half years ago we had the opportunity to see Google Expeditions first hand in our schools as we were one of the few lucky districts that were chosen to participate in the pioneer program for the highly anticipated virtual reality tours. This was an awe inspiring experience for both our students and staff. Engagement couldn’t have been higher during these tours and lessons for this event. It became obvious that we needed to do something fast to try and work something into our budget, or write a grant to cover some of the costs, to purchase a kit when they became available later that summer.

The kits at the time were only being sold by BestBuy in the states and were tagged at a really high price for education. The phones that fit into the VR headsets and the rugged Pelican case to carry all of the materials in brought the price tag way up. Something that couldn’t really be replicated for cheaper money at the time due to the release of the free Expeditions app on Android only that summer. Now that it has been released for Apple’s iOS as well, there are cheaper options for the device itself including an iPod Touch instead of a phone. Of course, if you plan to use these in high schools or even middle schools where phones are allowed, than you can eliminate that cost from your budget immediately. However, before you go to purchase any VR headsets you should take a look at what is coming out next for Google Expeditions.

Last spring we were one of the few schools that were able to beta test the Google Expeditions augmented reality app. This flips the experience on its head a bit. In a virtual reality experience, students and staff are placed into a fully immersive experience away from their original surroundings, either through high quality photographs or a digital world. In the AR experience, you remain within your original surroundings, however digital 3D objects and animations come to life right in front of your eyes.

Again, Google toured the country with the pioneer program, and we were chosen once again to check out the updates from a year ago (it pays to be a Top Contributor and Trusted Tester for Google) which showed improvements that certainly made the teachable moments easier to come by, and the enhancement to the learning truly engaging again. Immediately students and staff were excited about the possibilities to experience both a virtual and an augmented experience to investigate things like plant growth, natural disasters, dinosaurs, intergalactic discoveries, and much more.

Before you go running out though to purchase a kit, there are a few things you should know. First of all, it takes a relatively new device with a sophisticated camera to be able to pull of the augmented reality experience. We found this out the hard way. Our current Google Expeditions kit from BestBuyis not equipped with newer devices, and as of right now, there is not a quality buy back program in place for schools wishing to upgrade their kits to accommodate this new AR update. For this reason, it may be wise to wait a bit until these new kits have been created and Google officially launches the new AR app to coincide with their current VR app which now boasts over 750+ expeditions.

These updates in itself certainly have inspired excitement around the VR and AR world, but there is another update also coming to Google Expeditions this week. Google Expeditions Tour Creator, the ability to create your own Google Expeditions and move from tourist to a tour guide is scheduled to be released to everyone very soon. Again, as a beta tester for this tool, I found it very easy to photograph 360 images using a Theta S camera and uploading these images, additional information, still photographs for pop outs and audio to be reviewed by the Google team.

From an educational standpoint, having the ability to either take photographs of your own community, or grab 360 images from a gallery (not available yet, but send feedback) to create your own Google Expeditions, provides a very powerful tool for teachers to tell your own story and truly engage students in their learning. It would be amazing to add this resource to the repertoire or a menu of student options to present their learning to promote highly engaging choice and voice. I am highly anticipating this new updated release and cannot wait to see what educators and students come up with in the future.

cross posted at Reflecting on Technology in Education

Eric Lawson has spent 16 years in the elementary classroom and as a technology integrator. He is currently the Director of Technology & Libraries for the York School Department in York, Maine. He has been published in eSchool News, Tech&Learning Magazine and ISTE’s Learning and Leading with Technology Magazine for technology integrated projects and ideas. He currently works with the AppsEvents Team and consults with schools to deliver high quality professional development for education. Read more.