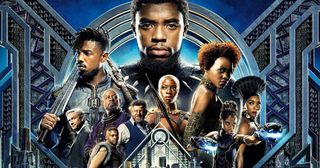 The movie Black Panther hit theaters February 16th, and since become one of the most successful Marvel movies, grossing more than 700 million dollars worldwide. Black Panther is a Marvel superhero film based on the Marvel Comics character of the same name. This is the first Marvel Studio movie to feature a predominantly black cast, drenched with African culture. "Black Panther" or T'Challa, was played by Chadick Boseman, is the king and protector of a fictional technology advanced African nation, Wakanda. T'Challa's younger sister Shuri, played by Letitia Wright, is a tech-savvy innovator who develops modern technology in Wakanda, including designing her brother's superhero suits and gadgets. STEM is infused throughout this entire film, inspiring educators across the country to make real-world connections to STEM in the classroom. I came across this wonderful video by teacher, Dr. Valerie Camille Jones who led a STEM infused lesson about the holographic displays generated through the Kimoyo bracelets worn by the people of Wakanda in Black Panther. The movie also inspired Disney to donate $1 million to develop STEM programs in the United States. This donation will go to Boys and Girls Clubs and help students in underserved communities. The donation is expected to help grow the group's national STEM (Science, Technology, Engineering and Mathematics) curriculum, and establish new STEM centers of innovation in Atlanta, New Orleans and Washington, DC.

Patricia Brown is a Technology Specialist for Ladue School District, with over 16 years' experience in education. She has been honored as a National School Board Association’s 20 to Watch, a 2016 Google Certified Innovator, a 2015 PBS Lead LearningMedia Digital Innovator, and Teacher of The Year. Read her blog at msedtechie.com.