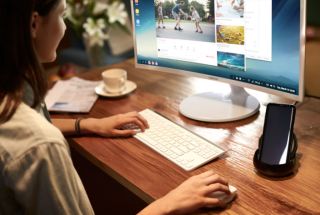 Tired of carrying around a bulky notebook or tablet all day from class to class? Samsung has an app for that. The company’s DeX Desktop Experience software is a unique program that lets teachers and students put all their schoolwork on their phones. With the power to redefine how schools deal with digital media and curriculum, DeX can be a real eye-opener.

Used by first responders and the military as a way to do without bulky computers, the key is that in addition to using the phone for calls, texts, social media postings and Web work, you can plug the phone into a display and interact in a full desktop environment that’s looks and feels a lot like Windows and macOS. In other words, there’s no need to carry a phone and a computer around anymore. Teachers and students can take notes, draw geometric shapes or sketch a social studies map on the phone directly and then plug it into a display, keyboard and mouse for heavier tasks, like writing or grading essays, doing Web research and interacting with online curriculum.

[Put To The Test—HP Chromebook X2]

Even though DeX has the power to turn a phone into the equivalent of a full desktop computer, its day-to-day use is surprisingly simple. There’s nothing to download or install; the needed software is already on the phone. DeX leaves all the phone’s security in place and when it’s connected, you can open the phone by entering its PIN using a keyboard.

The result can be eye-opening for educators, to say the least. When its connected to a display or projector, instead of a cramped vertical view of the phone’s screen occupying about one-third of the display space, Dex delivers a full-screen horizontal experience at up to the phone’s screen resolution.

Windows and Mac users will feel right at home. There’re icons for programs as well as a row of apps and services along the bottom. Click on any icon and you get a full-screen space to work with. It’s perfect for typical school tasks, like researching a chemical reaction online, going through a spreadsheet of chem lab results, writing up the lab and even adding in tables and illustrations. That’s because under DeX’s skin is a full multi-tasking environment where windows can be resized, moved around and items can be dragged from one window to another.

The latest DeX software allows another trick. If you load the DeX app on a PC or Mac and plug the phone into its USB port, the phone can exist inside a window on the computer. This allows you to drag images, Web addresses and blocks of text between the computer’s open windows.

Unlike other platforms, though, there are no native DeX programs, per se. There are, however, hundreds of Android apps that have been enhanced to work with DeX. They range from Word, Excel and PowerPoint to Adobe Acrobat, Gmail and the Chrome Browser to a slew of Photoshop apps and several videoconferencing services. The vast majority of Android apps have not been enhanced but work with DeX without a problem.

Not all phones work with DeX, though. The easiest way to make the connection is to use a USB-to-HDMI adapter with a Samsung Galaxy Note 9, S10, S10+, Note 10, Galaxy Tab S6 or Active Tab Pro tablet. Older phones, like Galaxy S8, S8+, S9, S9+ or Note 8 phone require the $60 DeX Station dock that also charges the phone. Once the phone is connected to the display, you can either use a USB hub to plug in the keyboard and mouse or link them using Bluetooth. You can also use the phone’s screen as a touchpad.

Using DeX at school will require a paradigm shift to say the least. Imagine that rather than supplying computers for students and teachers or specifying what parents should get for their kids, the school required students to have a DeX-ready phone. The students would do their class assignments, homework and tests on the phone either directly or connected to a keyboard, screen and mouse that the school provides in classrooms, libraries and common areas. At home, they can plug into a computer for research, homework and working on longer projects.

To see how DeX can change the dynamic of teaching and learning, I set a Note 10+ phone up with an Acer 21-inch HD display, generic USB-C to HDMI adapter and a Logitech K400 wireless keyboard and touchpad; later, I switched to an AOC i1601FWUX USB-C display, which didn’t need a video adapter. All told, it took less than a minute to set up and the gear cost less than $150 but getting a compatible Samsung phone is the big-ticket item, costing between $200 and $1,000.

I started by creating and presenting a social studies lesson in PowerPoint on immigration using the public records from the Ellis and Angel Island immigration archives. Then, I moved on to giving a lesson on simplifying fractions and how hydrogen bonding affects biology. When I was connected to the display, keyboard and mouse, it was the equivalent of desktop computer but when the bell rang, rather than stuff a cumbersome notebook into a bag, I unplugged the Note 10+ phone, put it in my pocket and was ready for the next class.

The DeX desktop came into its own when I used Google’s Live Transcribe app on the phone to record a 45-minute lesson. While the initial transcription was tolerable, using DeX, a big screen and keyboard made correcting its mistakes much easier than doing it on a phone’s small screen or transferring the data to a desktop computer.

It’s odd, but about the only thing DeX can’t do is allow me to use the phone’s touch-sensitive display and its S-Pen to interactively annotate what’s on the screen. This would have been a big help in pointing out a trick while solving an equation or underlining a passage in a novel.

DeX may not be for everyone, but it has the power to transform your phone into a desktop computer. Afterall, you already have your phone with you all day, why carry anything else.