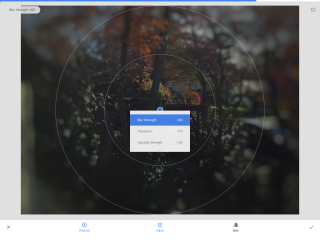 As a learning tool the tablet has been proven day-in and day-out in a variety of schools with online curriculum, e-books and the platform’s ability to squeeze a full computer into something small, light and cheap. Add image editing to the tablet’s triumphs because there’s a wide assortment of apps for everything from changing a photo’s color balance and contrast to making an image fit on social media to creating collages. The best part is that if you shop carefully, it can all be free.

While Apple’s Photo Booth and the iPad’s built-in image editing tools are good, they are rudimentary with the ability to alter the basics. Using an iPad Pro, I sifted through dozens of free image-editing apps for tablets and came up with these three programs that take image editing to a new level and easily fit into the classroom. However, each focus on a different aspect of turning raw images into works of art.

Adobe’s Photoshop may be the standard of comparison for image editing but there are several choices for tablets, including the free Photoshop Express app. Available for Androids, Chromebooks, iPhones and iPads, Photoshop Express squeezes a lot of potential into a small package but lacks things provided in Adobe’s paid programs, like Lightroom CC.

While Express requires students to register, this allows them to tap into their online Creative Cloud account for instant access to gigabytes of images. Adobe also provides lots of teaching resources from lesson plans to how-to guides.

To get started, just pick an image from the iPad or shoot one directly into Express’s interface. With the ability to do everything from changing formats and adding stickers to correcting for red eye and dehazing images, the app has loads of potential. Below the image is a row of editing tools, including cropping, applying Themes, adding text and framing the image.

The beauty of Photoshop Express is that each of these editing choices provides several potential changes. For example, cropping not only lets you cut the image freeform but to correspond to specific aspect ratios, such as for an Instagram or Facebook posting. On the downside, for some of the processes the identifying text for the choices can get misaligned, making it hard to figure out which is which.

While it lacks truly advanced techniques, like turning the image into tiles or folding it geometrically, Photoshop Express does a lot with a little, and can turn students into image artists.

Attempting to streamline image editing on a tablet, Snapseed has a simple, straight-forward process that can let students ignore the nitty-gritty and concentrate on the result. In other words, it lets the creative juices flow.

Created by Google, Snapseed is free and works with Androids, Chromebooks and iOS systems. You don’t have to register but Google provides only minimal help in getting started. That’s OK because most of Snapseed is self-explanatory and several third parties have created lesson plans for this app.

Using its editing and effects starts with tapping the “+” link on its plain opening page. After that, pick from among system’s gallery of images, the most recent ones or shoot directly from the tablet’s camera.

In addition to a useful auto-adjust and preset Themes, like Fine Art, Structure and Pop, Snapseed places a wide variety of editing techniques in front of students. Feel free to play with the image’s brightness, contrast and color saturation. I was able to take this to a higher level by adjusting the image’s warmth as well as play-up or -down its shadows and highlights. There are add-on filters for giving the image a vintage look, adding drama to the image and making a photo to appear as if it’s from an old movie. I spent a bit of time playing with the double exposure effect that layers images on top of each other for a ghostly effect.

The good news is that each filter has several choices available, making it great for experimentation. Nothing is saved until you accept the changes.

One of the easiest ways to add everything from a frame or text to a sophisticated lens blur, many of the effects are complicated but Snapseed’s interface makes them seem simple and a matter of picking the one that looks best.

Rather than concentrating on photo editing, Moldiv is the easiest route to making all sorts of artistic collages. Advanced tools for adjusting and enhancing images take a back seat to assembling pictures together into an integrated whole.

The program can be used with iPhones, iPads, Androids and Chromebooks. JellyBus has rudimentary tutorials and third parties have created guides for a wide variety of projects online, including making holiday cards.

Moldiv provides a competent image editor with dozens of filters for making changes, but the focus is on collages. The first step is to choose the template you want to use from the hundreds available. There are simple quadrants, ones that end up looking like tangram puzzles and templates that are very complex with large and small slots for pictures. All can be adjusted by dragging the border between images and even rounding the corners of the images.

Beware, the program may be free, but it displays ads and there’re extension packs that cost between $2 and $5 that add to the program’s depth. Still, the base Moldiv has plenty to bring out the inner artist in all of us with a variety of solid and patterned backgrounds. It’s the best bet for arranging photos for printing as a poster or viewing online.

There’s nothing to register. Just tap on a section and then grab the first image from the tablet’s gallery or shoot from the tablet’s camera. The shot is automatically placed in the frame. Keep going with other shots and then add a caption and you can save it as any of three resolutions.

The key to Moldiv’s success is that regardless of which images you use, the app automatically adjusts their brightness, color and tone. The result is that all the shots look good together. Along the way, the app has several YouTube how-to videos that can help get the project going.

If you’re looking for a way to document a school assembly, graduation or play, there’s no better way than to create an artistic montage with Moldiv.