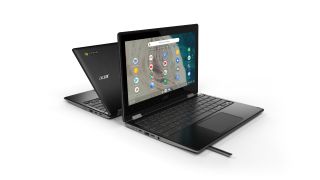 Acer has announced a new suite of 11.6-inch Chromebooks for education customers. All have durable designs that are MIL-STD 810G compliant and intended for education.  They include:

Acer Chromebook Spin 511 (R752T) has a convertible and durable design featuring an Antimicrobial Corning Gorilla Glass touch display and is powered by Intel Celeron N4000 and N4100 processors. It has an MSRP starting at $379.99.

Acer Chromebook 311 (C733) provides a spill-resistant keyboard that can route up to 11 fluid ounces of water out of the chassis in a traditional and durable clamshell design. It powered by Intel Celeron N4000 and N4100 processors and has an MSRP starting at $299.99.

The new Acer 11.6-inch models will be available to commercial customers in North America starting in April.