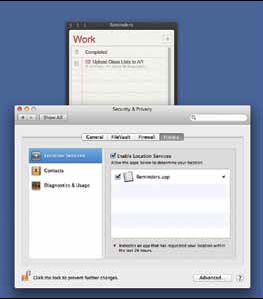 Quality and Effectiveness: Mountain Lion (updated to OS X 10.8.1 on August 23, 2012) takes many of its new features from Apple’s mobile operating system. With Mountain Lion, there are now even more similarities to iOS 5.1 because the familiar Notes, Reminders, and iMessage apps are fully integrated stand-alone utilities that work seamlessly with Apple’s popular Mail, Contacts, and Calendar applications.

Ease of Use: The hardest part of upgrading to Mountain Lion could be that your older Apple computer may be unable to make the transition. Once installed, you’ll quickly notice that Mountain Lion doesn’t look significantly different from Lion. There is, however, much to explore and “enable” in the new OS X, as Mountain Lion boasts nearly 250 additions or improvements.

Creative Use of Technology: While Mountain Lion offers several impressive new features, many of them are quite subtle. These include the Privacy tab of the Security and Privacy pane (System Preferences), the Dictation capability available through the Dictation & Speech System Preference, and the Notification icon that appears in the upper right corner of the Finder’s Menu Bar. Three other new Mountain Lion features, however, provide significant benefits to educators and students: “AirPlay Mirroring,” which allows Mac to broadcast data from the desktop or laptop to an Apple TV; “Dictation,” which lets users “type” text by speaking it into the microphone; and the “Accessibility Pane,” which offers improved support for VoiceOver.

Suitability for Use in a School Environment: Some Mountain Lion improvements may be problematic for schools. For example, many schools prevent students from engaging in “chat.” Yet Mountain Lion features Messages, the application that replaces iChat. Additionally, if a user with an Apple ID stores documents, photos, media files and other resources in the “cloud” using the iCloud service, those resources will be available to all users with the same ID. Management of Macintosh desktops, laptops, and iOS devices by a district or school IT department will require careful planning according to the school or district’s acceptable use policy.

OVERALL RATING: Mountain Lion scores high points for ease of use, new features to support teaching and learning, and improved accessibility. If your school uses older special purpose software incompatible with Mountain Lion, you’ll want to hold back on upgrading all machines to the new OS X.