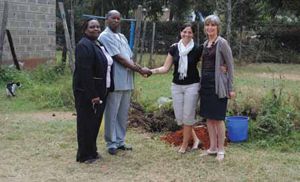 As school budgets shrink, grants are an increasingly important way to support core activities and pioneer innovative approaches to education. Here are four strategies that won significant grants for the schools that employed them.

Educators from the William W. Henderson Inclusion Elementary School during a treeplanting ceremony to celebrate the partnership between ther school and Nairobi’s Kilimani Public School.

WHAT THEY ARE DOING WITH THE GRANT: Teachers Danielle Merdin and Terri Wellner used the grant to fund an educational tour of Kenya and establish a virtual information project with the fourth-grade class at Nairobi’s Kilimani Public School. They worked with Kilimani to provide technology to the Kenyan school and train teachers there. They then returned to Boston to launch a school-wide virtual information project at Dr. William W. Henderson. The effort has gained such momentum that two additional Henderson teachers, Joann Brown and Ellen McCarthy, applied for and received a second Fund for Teachers grant to continue their colleagues’ work in Nairobi this summer.

WHY THEY THINK THEY WON: Merdin and Wellner made sure that their grant application addressed all seven FFT categories. They also made the proposal more compelling by providing a benefit for the school in Nairobi as well as their own school. The project’s “use of technology has allowed continued learning on many levels, marginalizing the 8,000 miles separating the participating students because of a computer at their fingertips,” the teachers say.

HOW LONG IT TOOK TO GET THE MONEY: The deadline for applying for the grant was January 3, 2010. The school was notified in March 2010 that it had won, and it received the check in April.

WHAT THEY’LL DO DIFFERENTLY NEXT TIME: The only change Merdin and Wellner would make is to be more aggressive in seeking grants. “Basically, this experience has taught us to stay open to great possibility and dream big dreams; they just might come true!” they say. “So many dreams for the future are dancing in our heads: more inclusive partnerships, expanding the cultural connection, comparative sports and play study, incorporating therapists and therapies.”

WHAT THEY ARE DOING WITH THE GRANT: The grant was used to launch the Falcon Report, a live-stream television program streamed over the Web; whose content is produced by fifthgrade students. The students investigate, produce, and report the daily news program, which is viewed by the entire student body and school staff. Internet technology also provides a bridge to Fernbrook families and friends around the state, the country, and the world, as the students and staff are diverse and represent many places and cultures.

WHY THEY THINK THEY WON: “We won the grant because we created a hands-on program that provides many creative and unique educational experiences for students,” says Fran Lavin, the PTA’s vice president of grants. “The Falcon Report is an exciting way for students to learn about current events and develop computer literacy, enhance research and communication skills, and learn how to work collaboratively and meet production deadlines.”

HOW LONG IT TOOK TO GET THE MONEY: about a month

WHAT THEY’LL DO DIFFERENTLY NEXT TIME: The school and PTA would involve the school district’s IT department in the process earlier. “Since we were on a tight deadline for submitting the application and there was not a lot of technical information required in it, the IT department did not get involved until after we began to implement the program,” Lavin says. “Unfortunately, we had some glitches in our broadband communication system that might have been prevented had the IT department been aware of the program’s parameters.”

WHAT THEY ARE DOING WITH THE GRANTS: In 2006, Silver Hill was the lowest-performing elementary school in Haverhill. A complete overhaul of the curriculum-delivery system was needed. Technology was seen as the foundation of the new system. So Silver Hill equipped each of its 25 classrooms with one MacBook per teacher, an ELMO projector, a computer projector, an eInstruction CPS Student Response System, and eInstruction Mobi mobile interactive whiteboards (four student Mobis and one teacher Mobi), all housed in a tech cart. Thirty-two iTouches and 10 iPads with apps were also purchased for classroom use.

WHY THEY THINK THEY WON: “We were awarded the Horace Mann Charter School start-up grant, which is the biggest chunk of money [$525,000 for three years], and all other grants have supported the strategic plan of the Charter,” says Themia Gilman, principal and executive director. “So it is good planning and strong leadership!”

HOW LONG IT TOOK TO GET THE MONEY: “All grants were timely,” Gilman says.

WHAT THEY’LL DO DIFFERENTLY NEXT TIME: “Actually, with the results of making AYP in the aggregate and subgroups and being the only school in Haverhill to do so, I wouldn’t change a thing.”

WHAT THEY ARE DOING WITH THE GRANT: Jo Nelson Middle School has been working hard to improve its students’ academic scores. As part of this effort, it applied for the CRIMSS grant from the Texas Education Agency. Most of the funds are being used to pay an education service provider from the Southern Regional Education Board, principal Aminta Olivarez says. The board enrolled Jo Nelson Middle School in the Making Middle Grades Work program to make the school’s eighth-grade students more prepared to enter high school. MMGW includes the development of practices that are key to improving academic scores and teachers’ skills and to enabling students to complete assignments and achieve proficiency. The rest of the funds were budgeted for field trips to colleges.

WHY THEY THINK THEY WON: “Our school had made tremendous gains in the last few years,” Olivarez says. “But there were areas that we could improve in, such as the number of students receiving the Commended level on their TAKS [Texas Assessment of Knowledge and Skills] and promoting higher academic achievement for all students at every level.”

HOW LONG IT TOOK TO GET THE MONEY: The school applied in the summer and received the funds in the fall.

WHAT THEY’LL DO DIFFERENTLY NEXT TIME: “I didn’t budget enough money for the students’ college field trips, because I was counting on the local budget to pay for our transportation; and when the budget cuts began, I was unable to use that money,” Olivarez says. “Next time I would look for other monies to fund these college trips.”