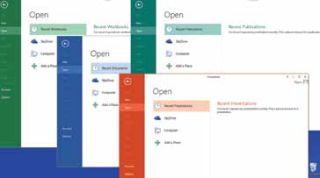 Microsoft Office Standard 2013 and Microsoft Office Professional 2013 are two tools for achieving learning goals. Installed for use on a single PC, these suites enable users to create and share written work, spreadsheets, charts, and electronic slideshows more easily than ever before.

Quality and Effectiveness: With the release of Office 2013, suite applications work well on a range of devices, including, but not limited to, laptops, netbooks, and desktops. New Office 2013 features support touch screens, Windows tablets, Windows phones, and Windows 8 computers. Thankfully for schools and districts using older technology, suite applications can also be run with Windows 7. Office 2013 applications work with Microsoft’s cloud service, called SkyDrive. This feature enables users with a free Microsoft account (previously called “Windows Live ID”) to sign in from any computer with Internet access to view, edit, download, or share stored files.

Ease of Use: The main Office 2013 products (Word, Excel, PowerPoint, and Publisher) all have a similar look and feel, making it easier to upgrade from Office 2007 or 2010. They sport the same colorless Office 2013 ribbon interface and many of the same dropdown menus. If you’re new to the Office environment, be prepared to spend time getting started, as each program in the suite is an industry standard, with many features and customizable options.

Creative Use of Technology: Office 2013 boasts several other new features. My favorite feature in Word is the ability to convert PDF files into Word-editable documents. Word, Excel, and PowerPoint include new apps for the “Office” option on the “Insert” ribbon. You can simply click the button to visit the Office Store to locate apps extending the functionality of Word, Excel, or PowerPoint directly from the application. For Word these include Word of the Day, Search the Web (using the Google Search engine), Lucid Chart Mindmaps, and more. Some apps are free while others require payment.

Suitability for Use in a School Environment: Installing Office Standard 2013 on compatible machines in a school environment should pose no particular problems because the volume license agreement lets you download the full suite, complete with the installation key. Office 2010 runs on Windows XP, Vista, 7, 8, and a terminal service client. Office 2013 runs only on Windows 7 or newer Windows 8 devices. Moving to Office 2013 is not an option for older computers.

OVERALL RATING: Demanding hardware requirements and Internet bandwidth limitations may deter you or your school from upgrading to Office 2013. However, Microsoft’s flagship productivity suite, with enhanced support for a variety of media types, has many tools to help students develop and practice important 21st-century skills, especially creativity, communication, collaboration, and the ability to manage information gathered from many sources.