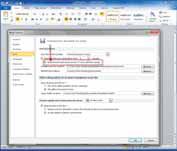 Office 2010 continues with the Open Office XML format and tabbed Ribbon interface used in the 2007 edition, while familiar features and commands from earlier versions of Office return to keep the updates user-friendly. Microsoft has enhanced and expanded its Ribbons, enabling users to customize command functions according to personal preference.

QUALITY AND EFFECTIVENESS: New enhancements include improved picture-editing tools so users can automatically apply borders, special effects, and layouts to images. Word, Excel, Publisher, and PowerPoint feature a new Live Preview that allows users to experiment with formatting changes before applying them. New Equation tools in Excel make it an ideal teaching tool for math classrooms. Autosave features have now been added to Word, Excel, and PowerPoint, assuring users that their work is less likely to be lost.

EASE OF USE: Office 2010 builds on features of earlier versions of Office, so Office 2003 and 2007 users will find themselves in familiar territory. Office 2010 permits more customizing with menus and command functions.

CREATIVE USE OF TECHNOLOGY: PowerPoint 2010 now supports QuickTime movies and includes some basic movie-editing tools that allow users to trim the length of a video and add borders and other special effects. Once your presentation is done, you can easily share it online using the new Broadcast Slide Show option. This shows the Slide Show to other users over IE, Firefox, and Safari even if the recipient does not have the newest version of PowerPoint. Broadcast does not support audio, however.

SUITABILITY FOR USE IN A SCHOOL ENVIRONMENT: Office 2010 strongly emphasizes collaboration and file sharing. Users in several locations can easily work together on a single document using the Office 2010 Web App versions of Word, PowerPoint, Excel, and OneNote and SkyDrive, Microsoft’s free Windows Live service. These Web Apps contain a limited subset of their respective parent features yet provide users with a dynamic way to continue working in an Office environment online. Unfortunately, users can not yet upload documents directly to Microsoft Office Web Apps. Instead, you must create the document online or use the appropriate application in Office 2010 to save the document to the Web.

Microsoft Office applications remain the standard against which all other word-processing, spreadsheet, presentation, and entry-level desktop-publishing applications are judged. Office 2010 raises the competitive bar by adding many improvements and features that support online collaboration and document sharing in real time. Its one-stop digital collection of productivity tools, bundled in one interface, is hard to beat.