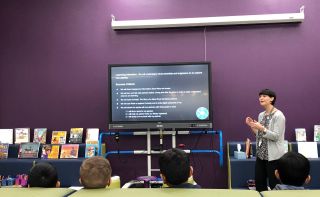 Del Valle Independent School District (DVISD) in Del Valle, Texas, had its eye on the future when it opened the Newton Collins Elementary School. In addition to displays for the new building, the district was exploring displays for a new high school career and tech ed (CTE) building, as well as alternatives to the projectors that were reaching end of life in classrooms throughout the district.

“We took time exploring our options, but we were sold on BenQ,” said Todd Gratehouse, CTO at Del Valle ISD. “It provided the infrastructure to support our current devices such as our Chromebooks as well as those we might use going forward. We weren’t limited by what sources we could connect. Teachers simply plug their laptop in via USB, and with InstaQShare, we also have wireless capabilities. On top of that, we could trust that our students and staff’s eyes were being safeguarded from the effects of screen use as the IFP becomes a common tool in our classrooms. BenQ raised the bar on the whole experience.”

Since Newton Collins Elementary School opened, Del Valle has installed additional IFPs within some renovated classrooms at the high school and the high school’s new career technology innovation wing as well as three offices within the district’s administrative building. With a range of connectivity options, many devices can be connected to the IFPs including a Lumens’ Ladibug document camera in addition to each classroom’s Chromebook. The BenQ IFPs within the new elementary school were installed on IFP carts with an electronic lift to allow every student access to the display and encourage collaboration.