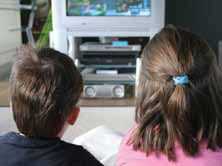 Nearly 25% of young children (aged five and under) use the Internet at least once a week, and slightly fewer than half of six-yearolds play video games.

Media multitasking is becoming predominant; about 36% of children aged two to 11 use television and the Internet simultaneously.

Television continues to be the favorite medium. Almost nine out of ten children over age five are viewers. They watch at least three hours of television a day.

Digital divides are still prevalent. A gap in access to technologies remains, especially among low-income and ethnic-minority children, as well as notable differences in usage.