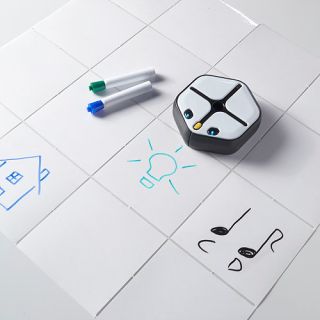 One of my biggest takeaways from the FETC conference in January was seeing the Root robot live. I wrote about it at the time, and you can find that post at this LINK. Basically, Root is everything I was looking for in a coding robot, and I could not wait to try it out.

Fast forward to the beginning of summer, and I have tried them out. After FETC, I wrote the company and asked them if there was any way we could partner. Kennesaw State iTeach (where I work) was getting ready to roll out a maker bus and maker camps, so I saw plenty of opportunity for a partnership, and thankfully the awesome folks at Root did as well. They added us to their initial pilot program, and they worked with us to get us a few loaner Root robots before their first production units were out. Every interaction I have had with the Root team has been excellent, and it just shows a company with a commitment to working with educators. There are many education companies where that commitment can be hard to see.

What you want to know is my first impressions of the robot, right? Well, let's say its good, REALLY GOOD. We started off with a preproduction Root and a beta version of the app that only gave us Level 1 one coding (meant for pre-readers). The company was still working on the final version of the app (which has both blocks and text), but having level 1 allowed us to get Root out to some of the bus events we were hosting,

The activity we chose to do with Root was to have it write on the whiteboard style wrap on the bus. Root is magnetic, so he sticks to the side. The bus has a few quirks in it, so occasionally we would have to pick Root up and reset him, but other than that it worked incredibly well. Kids were able to use an arrow based pre-reader coding to draw shapes, letters, and whatever other abstract art they wanted to mural our bus with.

Root also hit some of the little things that go into coding robots out of the park as well. Pre-reader arrow based coding is often very childish so older elementary and middle fill like they get little out of it. That wasn't the case here. Root's pre-reader program is merely pulling arrow commands into a code field, and we used it successfully even with 8th graders. Just like others, Root also works through connection to Bluetooth, but unlike others I found that connection to be incredibly easy. You just open a programming field, click on the picture of the robot, and you're done.

One of the best things though had to be Root's battery life. I was curious if this would be longer considering its flat form factor would make it easier to put a larger battery in, and thankfully it was! Root's battery life outperforms other well-known coding robots by a whole lot. We had Root, and these other companies robot's on our bus all day for events, and I did not have to recharge Root once. It beat others by almost double. To me, the simple connection and battery life are significant factors in purchasing, and the Root team has hit that out of the park.

What really makes Root great though is all the things you can do with it. You would think the shape of a robot is not a factor, but it becomes a HUGE factor when you think about building other things for it. Root's flat shape allows you to attach almost anything to it. This opens up the possibilities of having trailers, chariots, and more. It also makes it easy to build obstacle courses and cities for it. On top of that, I can envision doing an engineering challenge with it where you ask the Root to complete a coding task with the tallest building made out of something like straws on top.

I know in many ways I am gushing about this product, but after testing it, I think it's the first robot you should buy for your school. I think what gets lost on many when considering robots is what is the ceiling and what is the floor. There are several robots on the market that do cool things, but the ceiling is incredibly low. Root's ceiling is incredibly high. It's a robot that gives you multiple options right out of the box, and it's one of the only robots that is genuinely k-12. Check it out for yourself at codewithroot.com