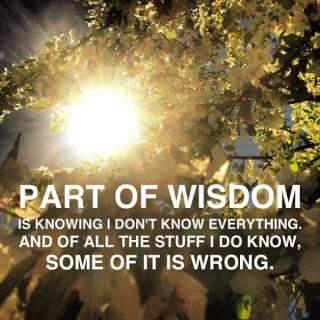 Speaking in generalities and platitudes is easy. But living out the hard things in life is rare. Believe me, I’m guilty as the next person and am working on my own ignorance and faults.

An ever-growing passion of mine is to seek out people that I disagree with and yet can have productive conversations. Even if a conversation is not possible, at least reading/watching/listening to those ideas and beliefs can be fruitful. My premise is that the many of the people I see online would like to believe they are open-minded and yet are so easily offended that they rarely if ever seek opinions and ideas that would contradict their own. We know the echo chamber exists and it’s not always a bad thing, in fact, it’s important to surround yourself with those who support and encourage you. At the same time finding a few folks who will push you, challenge you and straight up disagree with you is the sign of a mature, healthy learner; the kind of learner that educators ought to ascribe to.

As I said, I’m sceptical. Easy to talk about being open to new ideas, harder to seek them out. As I scan my feed, I’m always intrigued when thoughtful disagreement occurs. It’s a rare find. One of my favourite examples of this is a long-standing podcast called: A Christian and an Atheist. They’ve recorded over 100 podcasts over the past several years.

So who pushes your thinking? Sometimes it’s important to name names.

I asked this question recently and here are the results. As I suspected, I didn’t get many responses. While many thought this was a great question, I think when it comes down to it, it’s hard for many to come up with a list or even a name of those who challenge their thinking. I made it anonymous so no need to reveal your personal beliefs.

In the spirit of modelling and practising what I preach, I included one of mine on the list but thought I’d share a few other names as well.

Jordan Peterson I agree with his ideas about free speech. Not sure about his thoughts on privilege. He’s an odd mix of brashness and yet occasionally shows a humility about his own thinking.
Paul Bennet Raises many issues in education that plenty of people are thinking but philosophically I think we differ greatly. Good to hear his perspectives.
Sam Harris Super smart guy. His worldview is vastly different than mine but insightful nonetheless on a broad range of topics.

[Stop Worrying About the Achievement Gap]

I think it takes some very distinct characteristics to allow yourself to appreciate, acknowledge and learn from people you don’t always agree with. Things like:

Self Esteem: It’s important to feel somewhat confident in ourselves. Those who feel somewhat fragile are less likely to engage in ideas that challenge them. In addition, without a healthy dose of esteem, it’s too easy to let a challenging idea become personal.

Time and space: I’ve mentioned often how Twitter and even Facebook are typically horrible places for any kind of civil discourse. Online, in general, is a real challenge for nuanced discussion. Taking these discussions offline might be the best thing we can do. However, finding the dissenting ideas online is highly useful.

Seek understanding, not victory: This is a tough one. If we do have a strong belief, it’s so tempting to want to try and convince others. Holding back and working to listen and understand is very difficult. By not stating your best case, you aren’t conceding victory. It may be that some will interpret your silence or lack of debate as such, but swallow your pride a bit, in the long run, understanding will serve you better. I want to give a shout out to Tim Childers. Tim is about the best I’ve seen at trying to engage in meaningful political discussions on Facebook. Always respectful, always thoughtful, always seeking to learn.

Dismiss personal attacks: This is a difficult one particularly if you feel you’re being attacked personally. However, with time and space, work to parse out the argument to seek its validity. I recently had my students examine a few online discussions and highlight the comments that were of a personal and attacking nature and those that were actually legitimate arguments. I think that’s a skill we all need to develop.

Look for commonalities: In almost every heated conversation be it political, religious or educational, the focus is on the differences when in reality most times there is a fair bit if not a great deal of agreement. Certainly, the differences are what make for the discussion in the first place but perhaps listing and seeking what is agreed upon is important to develop a level of respect and even collegiality. In fact, I don’t think it works if you find someone who is completely opposite. You have to have some common ground. I think it’s important to establish that up front whether you do that internally or collaboratively.

There are likely many characteristics than this but these some of my thoughts. Cognitive dissonance is not something we always enjoy but I believe it’s part of the human experience and one that in the end, makes us better.