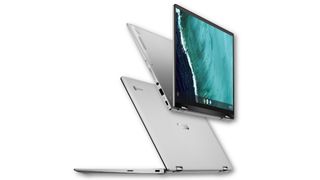 Everything you need to know about Chromebooks could make all the difference, whether you're a student, teacher or in charge of your district.

A student needs a few basic things to get the most an education has to offer: tools to get and stay organized, a resource to study and with the information they need, and a system to communicate with other students and educators. They also need to learn how to learn, which can be the biggest challenge to an educator.

Chromebooks can check all of these boxes and then some — with simplified management, maintenance, and oversight — which is part of these devices have made such a big impact in schools. That and the fact Google Classroom has become widely used nationwide.

Here's everything you need to know about Chromebooks in education.

Why use a Chromebook in the classroom?

In the classroom itself, Chromebooks provide a gateway to everything a student needs in order to learn and everything a teacher needs to guide them. Little things a consumer may take for granted, such as automatic updates and the ability to sign in to any device and have your profile available, mean more time can be dedicated to studies instead of administration.

What can you use on a Chromebook?

Chromebooks also work seamlessly with Google's educational software: Google Classroom, G Suite for Education, and even Google's consumer applications such as Gmail or Google Keep. With these apps and services, students and teachers can work online or offline, syncing with Google's servers in a seamless way.

It's very difficult to tell you're working with an app that stores its data in the cloud because the experience is so good, but you'll know it did when you pick up a completely different Chromebook and everything is just as you left it. This is great for students, allowing them to get back to work after they spill water all over a Chromebook and have to be issued a new one.

Chromebooks and Google's educational application suite are simple to use, well integrated into inexpensive Chromebooks, and the perfect foundation for education.

Chromebooks with LTE are a popular choice

An LTE Chromebook is able to connect to the internet from anywhere with a phone network connection offering up to 4G speeds. That means documents, images, videos and more can all be available even when away from a fixed WiFi connection.

This is great for teachers on the move, students working on the way home, or those without a stable internet connection outside of school. It's also a great way for schools to avoid putting too much strain on a WiFi connection.

LTE Chromebook options are currently limited, and the devices are more expensive, but many can be bought through providers networks, such as Verizon, with deals that include data.

What's special about an educational Chromebook?

You'll see a lot of Chromebooks out there branded as being Chromebooks for education, and you may be wondering what exactly the difference is between an education Chromebook and a regular one.

Really, there isn't much of a difference, at least from a hardware standpoint.

Any Chromebook can be used in the classroom and still have access to Google's educational suite to work, communicate, and collaborate with other students and teachers, so long as you're logged in. The applications and services are lightweight and easy on resources, so education Chromebooks don't need any beefier, more expensive specs.

What is different is the support contract. School districts that purchase through education channels can also contract various levels of support from the company that made the Chromebooks or through Google itself, such as on-site service or having a Google specialist help students and teachers get started.

Education-focused Chromebook models are often built with an eye on durability. You'll find thick polycarbonate shells and rubber bumpers to withstand bumps and falls, MIL-SPEC approval for survival in the elements, and even special features such as microbe-resistant screens to cut down on spreading germs from student to student or waterproof keyboard pads — kids can be messy, after all.

Google does have standards a Chromebook must adhere to for educational certification, but most are common sense requirements that almost all manufacturers follow.

For example, ever wonder why a Chromebook has lower-case letters on the keyboard instead of capital letters like most other keyboards? That's part of Google's requirements. For a small child learning how to read and type, it's important that a key be marked with what it will print on the screen when pressed. Ingenious!

Who makes Chromebooks built for education?

Most well-known manufacturers such as Acer, ASUS, Dell, HP, Lenovo, and of course, Google, all make educational Chromebooks at various price points. Most education-geared Chromebooks feature touch-enabled displays — which are great for interacting with Google Play-installed education apps and tactile learners — and a 2-in-1 form factor that allows each one to flip back into a tablet.

Chromebook tablets — which educators agree are better for smaller children to begin their education — are appearing in more schools as well. Small fingers and a big screen allow young students to draw letters and numbers in a familiar way so the basics can be taught before they graduate to a keyboard form factor.

Higher-end Chromebooks for education also come with extras such as an active stylus, and can even be bought with current generation high-performance internal hardware. This may seem like overkill for a consumer model, but Chromebooks are right at home in places like chemistry labs, where students can use temperature and pH probes to collect, analyze, and visualize data, or budding engineering students can use Google Sketch to design models for 3D printing.

Where can I buy a Chromebook built for education?

In the past, you had to purchase Chromebooks that were approved for education through special channels from the manufacturers. These days, however, you'll see education-focused Chromebooks from every well-known laptop maker, for sale online and in stores.

This is a boon for consumers who want to buy an education model because these are designed and built for a bit of abuse, and it's really great for teachers and parents who may just want to buy one or two Chromebooks to use at home. Not having to buy in bulk removes the barrier that prevented everyone from having access and it's a welcome change.

During self-isolation, the number of Chromebooks available dropped dramatically, but this helped to show the best ways to find supplies. Larger retailers, such as Amazon, Best Buy, and Walmart, are great options, as is buying direct from the likes of Google, Acer, ASUS, Dell, HP, Lenovo, or Samsung.

In the case of LTE Chromebooks, it can be best to buy from a network provider, such as Verizon, who may have more stock than other places where everyone has already been buying.