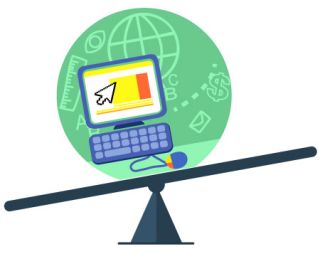 How do you react when the Internet goes down, when the tech doesn’t work in the classroom, or when you lose satellite reception driving through an unfamiliar city? We feel panicked, lost, frustrated. Connectivity is part of the fiber of our lives and most of us can’t imagine what we did before we had 24/7 access, much less what it must be like for the 60 million Americans without home Internet access. Many of these are students, and a disproportionate number of them are from low-income households—and especially Black and Hispanic ones. While they may be connected at school, they go home (some of them with their 1:1 devices) to a digital desert where they have no access to the knowledge and information that are a vital part of 21st-century education.

While these stories of educators fighting for digital equity are as unique as their contexts, the common factors are determination, urgency, and creativity. Ultimately connectivity is not just about the tech—it’s about being connected with each other. “Collectively,” says Dr. Darryl Adams, superintendent at Coachella Valley (CA) USD, “we can do anything.” Below is Part 1 of Tech & Learning’s three-part series on this topic.

Dr. Darryl Adams, superintendent of Coachella Valley (CA) Unified School District (CVUSD), has brought creative thinking, a passion to serve, and a little rock and roll to transform the low expectations of students and families in this valley 40 miles east of Palm Springs. With 100 percent of the 20,000 students qualifying for free or reduced-price meals, a large population of migrant families, a majority of EL learners, and possibly the largest number of trailer homes in the state, it’s a good thing that Adams, who’s also a musician and an “outside the box” thinker, insists that challenges are really opportunities.

When he presented the “moral imperative to eliminate the ‘Digital Divide’ which perpetuates poverty and … to ‘Leave No Child Offline’” to the community in 2012, Adams asked if they were willing to tax themselves in order to do it. Taxpayers approved a $42 million bond to fund 1:1 iPads, with enough left over to build one of the most innovative bridges over the digital divide yet devised.

While at school, CVUSD students are connected in 21st-century learning environments, taught by educators who have benefited from the district’s innovative training program, based on the SAMR-AI model. But most students live many miles from Internet access.

So Adams and his team wired the district’s 100-strong fleet of school buses with wi-fi routers (and solar panels for recharging). Students have access on their often long commutes to and from school, athletic events, and other activities. The district then parks buses overnight at trailer home parks and reservations throughout the district, thereby eliminating both the digital and the homework divides.

Adams has received kudos from many, including the White House, for his trailblazing efforts, and he’s happy to share his innovative ideas, but for him it’s still all about the kids and the community he serves. Seeing students building apps, coding, expressing their creativity through GarageBand and iMovie, and being prepared in multiple ways for college, career, and citizenship—those are the moments that confirm his calling.

AND FOR HIS NEXT TRICK …

The FCC recently changed provisions in the E-Rate rules so that districts like CVUSD can use E-Rate bonds for major projects like laying fiber and installing servers to become Internet-independent. Adams refuses to see kids held back by service providers who see no profit in providing access for their communities. “It’s not easy … but we feel like we can do anything if it’s good for kids.”

SO CLOSE BUT YET SO FAR

An ACSF elementary student using her iPad. Many students in the district don’t have access to technology at home.

While many Athens (AL) residents commute to Huntsville, a high-tech hub, a majority of the 3,900 students at Athens City Schools Foundation (ACSF) do not have home Internet access. Dr. Chris Hamilton, Chief Information Officer with ACSF, is attacking this digital divide on two fronts. While working closely with city officials to expand community access and to write grants to fund permanent solutions, the district has also instituted temporary measures to ensure that students have access when they need it—now.

Because of increasing poverty (54% of students are eligible for free or reduced-price meals), digital equity was a major concern when ACSF launched their 1:1 initiative three years ago. Students in grades K–6 have iPads (that don’t yet go home with them), and students in grades 7–12 have MacBooks. Although the older students can bring their devices home, “When giving homework assignments teachers are to assume that students don’t have home access,” Hamilton says.

She stresses the importance of helping community leaders understand early on that access is necessary—for everyone. The district also reaches out to businesses, churches, and youth centers, asking proprietors to display “Power Up” stickers, indicating that they welcome students to use their broadband. This kind of interconnected effort is one of the advantages, Hamilton says, of a small community.

To further increase student and family access, the parking lots of all eight ASCF schools have guest wi-fi access. Hamilton has been amazed by the numbers of people who use this service. In addition, students can come to school early and stay late.

A SOURCE OF PRIDE

At a recent tech night where students showed iMovies they created, Hamilton was struck by the parents’ pride. This pride is also reflected in the low percentage of devices that have been lost, stolen, or damaged (less than 3%).

One little girl ran down the school hallway recently to greet one of the district’s tech coaches. “Look!” she said. “This is my iPad, and I get to use it all day—it’s not just for smart kids!”

But for her, for now, the day with her iPad ends when she goes home. “Having robust Internet access at home is far more than just about being able to complete homework, it is about opening up a world of learning that extends beyond the school day,” Hamilton says. "We have an elementary student whose mom is stationed in Afghanistan. By using an app called SeeSaw, the mom can log in from Afghanistan and see her daughter's schoolwork. Through technology, not only can the mom see and talk to her child, but she can actually see some of her school work! It has been a wonderful experience for their family. [Connecting homes] is a community effort, and that’s what it’s going to take to continue narrowing this divide.”

Sterling Beane with Pre-K students in Kanawha County who are using technology to learn letters and numbers.

The beautiful hills of West Virginia are not conducive to laying fiber optic cable or to 4G. But thanks to a BTOP grant and other federal funding (E-Rate), in addition to eight years of careful planning, hard work, and collaboration between districts and state DOE personnel, every school in this state full of rural districts is now connected by fiber optic cable and has a robust wireless local area network.

Sterling Beane, chief technology officer for WVDE, emphasizes the vital importance of a thoughtful network design. “Investments in network infrastructure are long-term investments,” he says. The state also purchases all Internet access for its schools, which means that it can leverage its considerable buying power to stretch funds and also monitor demand and ensure equity. In fact, their costs have gone down such that they’ll be able to offer increased bandwidth.

While Beane is happy to have a solid, efficient, and scalable network, the next priority is to get students connected at home. “It’s tough to make a business case for laying cable in sparsely populated areas,” he says. And he’s very conscious of the widening digital divide as one student brings home a device to continue learning while another cannot.

A student at Pickens School using Skype to take an advanced science course from a teacher at Elkins High School.

In the meantime, the state and districts are working together on smaller-scale solutions, including a statewide LMS and purchasing software like Office 365 with OneDrive, which enables teachers to cache lessons down to student devices so they can access content offline at home.

ONE DISTRICT, ONE TEACHER, TWO CLASSES

One mountainous district has a relatively large high school in a town and a much smaller school in a more rural area. The smaller school does not have teachers to instruct more advanced classes like physics. But with a desktop camera and a Skype connection, teachers in the larger school can teach two classes at once. With their robust network connection, students in the remote classroom can participate and ask questions and turn in assignments on OneDrive.

Students throughout the state are benefiting from these solid networks—of cable and of relationships among stakeholders working together to eliminate the digital divide.