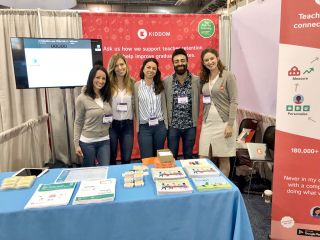 At this year’s ISTE conference, three sessions had the words “social-emotional” in their titles. This isn’t an overwhelming number by some standards, yet it’s more than in the past, when the word “emotion” was a rare term at a conference all about technology.

I came to ISTE to present a series of talks about mindfulness and learning, to co-lead a preconference workshop and featured session about virtual reality and presence, and to debut my book, Mindful by Design. To me, technology facilitates learning, and aspects of mindfulness and SEL are foundational. Everything is connected in a learning community, and educational technology is, of course, part of the picture.

During the conference, as I met more and more people who joined ISTE for empathy-infused themes, including storytelling, sketch-noting, visible thinking and SEL, the thought dawned on me: could it be that “edtech” is becoming a redundant term? Should it just be “learning?” After all, technology is ever-evolving and is becoming a seamless part of learning worlds as it focuses more and more on what is holistic and human-centric. Tech conferences (including ISTE, right at the forefront) seem to be shifting to embrace what’s been known since Piaget, Dewey, Minsky, and Papert proclaimed it: community and belonging make a difference, and in learning worlds, it’s all about projects, passion, peers, and play. Tech is a natural part of this, as is the social-emotional. We build meaning through a connected experience, and that connection happens inside and out.

At ISTE, the connections were palpable and emphasized the “whole learner”—in fact, ever since ISTE rolled out the updated student standards, which include attributes like “Global Collaborator: I strive to broaden my perspective, understand others, and work in teams effectively using digital tools,” and “Digital Citizen: I understand the rights, responsibilities, and opportunities of living, learning, and working in an interconnected digital world,” it’s been clear that empathy, self-awareness, and social-emotional skills are foundational values. In these standards, the ISTE executive board has made them visible. SEL is something that can and should be fostered at every level of education.

The question in my mind soon became not if or why SEL is being integrated into tech and learning, but how is it being interpreted and used? And who is leading the charge?

I soon found solidarity, discovering that third SEL-focused session at ISTE, led by Tamara Fyke, a creative entrepreneur who founded the organization Love in a Big World in 1996. Fyke came to ISTE to show how multimedia (namely music and videos) gets students thinking creatively and collaboratively. She says prioritizing SEL is vital to learning, as it “helps kids identify what is going on in their heads and in their hearts, so they can use their hands to build up and not tear down.” And, when SEL is partnered effectively with technology, the two amplify each other. “Like arts and games, technology can provide a microcosm of the real world for kids where they can practice their SEL skills,” Fyke says.

As I then led sessions about mindfulness, SEL, and storytelling (and some VR, too) with a group that included IT directors, curriculum developers, administrators, teachers, and others, it became clear that everyone is using tech in some way—and most are extremely motivated to use it in the best way possible, in their environment, with their communities in mind. It’s social, and it involves emotion as well as a design thinking skillset, with empathy for the user experience prioritized. I would certainly call that being Mindful by Design.

Exploring ISTE reinforced my view that this new prioritization is happening across edtech, from apps to learning platforms. From well-established Goliaths to startup Davids, the scene is starting to feature SEL in a major way.

Here are four standout examples from the ISTE expo you might not have heard of (yet):

1. Mind Yeti is a mindfulness app conceived in the innovation lab of the nonprofit Committee for Children, a leader in social-emotional learning. Mind Yeti’s product development team, which includes seven PhDs, developed the app based on current research. “SEL skills are best learned when dialog is part of the learning process,” says Polly Stansell, VP of Product. “Deeper learning of SEL skills happens when they’re explicitly and directly taught. We’ve seen some promising results when children are able to practice the skills that they’ve learned in either immersive environments or through games that allow them to practice executive function.”

2. An AR app from Finland called 3DBear is taking SEL to new levels through its innovative use of storytelling. Founder Jussi Kajala says they were inspired by Minecraft Education, also a Finnish invention, which helped to level the playing field but lacked interaction with the environment. 3DBear helps kinesthetic and visual learners flourish in the classroom, he says, by giving students a chance to tell stories in AR and represent emotions. The mission is to turn every child into a maker and designer able to visualize their world and solutions to problems. 3DBear earned an ISTE19 “Top Pick in Learning” award from Common Sense Media and has announced a partnership with the Digital Citizen Institute.

3. Wabisabi is a program designed to capture evidence of learning at every step of the journey, with formative digital tools, resources for portfolio work, assessments, and more. Founder Lee Watanabe-Crockett describes how the company is true to its name: “Wabisabi embodies the essence of a learner’s journey. At its core, it’s about growth and transformation, but also about learning from mistakes, adapting to uncertainty, and dealing with change. Our mission is to help teachers and learners leave the fear of imperfection and finality in learning behind. … Nothing is permanent except change.” The company is redefining pedagogy through “brave conversations” about values and meaning, both within and beyond traditions of learning, to create a growth mindset.

4. Kiddom is a platform that’s designed to help teachers save time, connecting schools from bottom-up and top-down, using data and research as a guidepost. Because Kiddom is interdisciplinary, SEL is interwoven into its fabric. Kiddom includes resources to ensure teachers know how to incorporate SEL. As Chief Academic Officer Abbas Manjee says, “As technology gets smarter and continues to empower us, the future won’t depend on students learning how to code or take AP calculus.” Students need to learn instead “how to solve complex problems with empathy and sound decision making. We need to work on fusing SEL skills into ‘professional’ skills and then drop the label.”

It’s not just views about SEL that are changing—the tenor of the entire approach to edtech is changing. As we enter an age of robust artificial intelligence that’s able to partner with humans, increasing productivity and performance through the automation of tasks and replicable processes, the emphasis in education focuses more and more on our ability as humans to give information context and meaning. We need to build and innovate with keen perception, ingenuity, and compassion. Why shouldn’t SEL be top priority in education? The fact that ISTE and other organizations recognize and encourage SEL as a necessary component of education is ushering in the next era of learning. The coming fifth industrial revolution will be one of building meaning as we integrate digital materials with purpose. As ever, the heart leads the way.

Caitlin Krause (@MindWise_CK) is a former teacher and curriculum designer who now runs the consultancy MindWise. She is the author of “Mindful by Design,” with resources and a global community online at caitlinkrause.com.