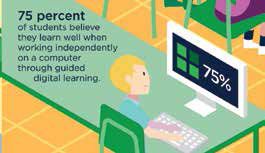 Seven out of ten students report that personalized learning helped them improve as independent learners, according to a first-of-its-kind national survey of over 4,000 middle-school math students released by New Classrooms. Students also say they learn equally well when working independently on a computer with guided support (75%) or in a more traditional classroom setting with teacher-led instruction only (77%). Students also reported the following:

* 61 percent would like to continue to learn math through multiple approaches. * 68 percent like math.
* 61 percent are interested in a future career in science, technology, engineering, or math.
* 80 percent believe that having multiple chances to solve the same problem helps them learn.
* 70 percent believe a few quick questions at the end of class are a good way to help ensure they are learning.
* 68 percent of students like working with different students and teachers over the course of the year.