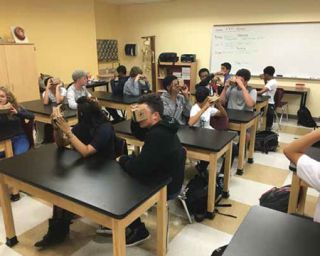 Students at Ossining High School in Westchester County, NY, recently participated in a Google Expeditions Pioneer Program. When asked for feedback about the program, the results were clear: students and teachers enjoyed Expeditions and liked learning from and with them, but there is room for improvement. Here are some of the student comments:

“I thought it was a cool experiment but if we were able to mover around more, I think it would be a more fun and engaging experience”

“I liked the Google expeditions because I liked seeing places in depth that I’ve never been before. I didn’t really like it because I almost threw up the period after.”

“We talk about so many different places within classes that you would think we would never be able to see or visit, but Expeditions gives students a chance to actually see places a little more realistically than in pictures.”

“I disliked Google expeditions due to the fact that you’re pretty much just looking at a fancy photo, you aren’t getting the actual experience of a field trip.”

“It really encompassed a new learning experience that I would like to use as it gave real life experiences in a classroom setting, allowing it to stay put in our memory.”

“I think it just took time away from actual learning I don’t think it accomplished much, besides making a group of 20 kids nauseous. Also you don’t learn much because kids are too busy fooling around looking at the image instead of listening to the teacher.”

“Google Expeditions enhances learning because it allows students to travel to the place they are learning about without ever leaving the classroom. Being able to see a place in a 3-D sense replaces the need for 2-D pictures that a student would normally see on a power point slide.”

Here are some teacher responses:

“The visual and interactive qualities made it very engaging for the students. My only dislike was that I planned a lesson not having a clear idea of the details or what would be seen. I also thought that the some of the locations could have had more images and details. For example, Edinburgh castle only had a street view, one room and a view from the roof. I thought we would actually be in more rooms and locations in the castle.”

“I was impressed, it was definitely a change of pace for the students. Also, the positive reactions of some prompted more participation from those who were not interested at first. I liked how I could direct their attention to certain things, although I wish it allowed for more mobility to really explore.”

Overall, students and teachers were excited by the 360-degree functionality and the graphics, but many felt uncomfortable with the Cardboard devices, and some even nauseous. A handful asked for more interactivity, like sound, video, and higher resolution images. Some teachers said that it was hard to plan for because the Expedition descriptions are vague and can’t be previewed beforehand. All of these criticisms are spot on. But so are the good things. They want to do it again. They want to create and have students create their own. And they realize the potential for Google Expeditions to change education. Read Adam’s complete survey data here: www.techlearning.com/jan16