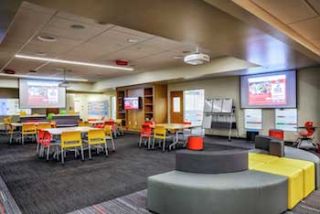 Tampa Preparatory School, an independent college prep school, lives by the four Cs—collaboration, critical thinking, creativity, and communication. Which is why, according to Chad Lewis, the school’s director of technology, its campus looks “a lot more like offices at Apple or Google than traditional classrooms.”

“Traditional classrooms haven't changed that much from the 1800s,” he said. “Technology is only part of the solution; the physical space needs to change as well, and of course, the pedagogy has to be adapted.”

Adapting the school’s classrooms to encourage the four Cs was a large task and investment, but one the school was willing to make for the sake of its employees and students. To begin, Lewis both formally and informally surveyed teachers and students to distinguish which aspects of the classroom environments needed to be addressed.

After the consultation, Lewis reached out to BCI Integrated Solutions, a local integration firm that had worked with the school on a variety of projects over the course of the last five years. Besides being impressed with the company’s “great” post-installation support, Lewis also enjoyed working with BCI’s vice president of audiovisual sales and design, Mike Fraioli. “He really took the time to understand our school’s culture and needs as opposed to just using canned solutions,” he said.

The FLEX-LTs were to be installed in each classroom and in the main gathering rooms. “BCI selected FSR’s FLEX-LT because it provided a highly functional, but still very economical option, that the spaces required to control all their technology,” said Fraioli. “The FLEX-LT also comes with built-in touch, control, and processing, making it an ideal all-in-one solution to quickly install and bring each classroom the functionality required.”
Once the technology was selected, it was time to transform the classrooms into “active learning environments.” The process would take two separate summers, and, in addition to the audiovisual integration, the school would also need architectural and electrical work, performed by a variety of vendors.

“Tampa Prep wasn’t just rolling out new tech, but drastically changed their classrooms and other facilities to give them a more modern, attractive, open look,” said Fraioli. The classroom spaces were now going to incorporate custom components including lighting, sound, comfort, and technology. This combination, the school believed, would be conducive to optimal learning and student engagement.

As with any install, this was not without challenges. The schedule was tight—demolition and construction could only occur during the summer, when school was out. Each contractor and manufacturer had to make its deadline or the entire process would fall behind. Lewis dealt with this using his project management skills, and served as a liaison between audiovisual, structured cabling, architects, construction, and even the school’s own team. “With any large project, communication is key, and it can be difficult to get everyone on the same timeline,” he said. “It was a lot of work, planning, and daily oversight.”

Once the installs were complete, BCI provided training to Tampa Prep’s CIO, who then taught the rest of the staff and students. Teachers at the school were given a week to get accustomed to the new active learning environments. “Due to our philosophy of seamless technology integration, it was really no problem for the teachers to become accustomed to it,” said Lewis. “They were soon able to make the pedagogical changes necessary to take advantage of the new technologies and infrastructure.”

Megan A. Dutta is the editor of Systems Contractor News