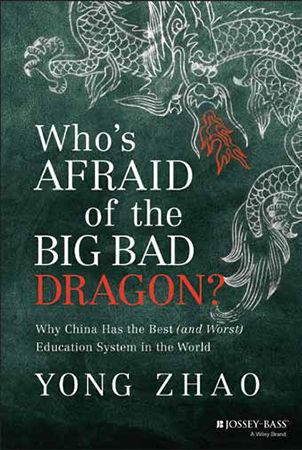 In the introduction to his new book, Who’s Afraid of the Big Bad Dragon?Why China Has the Best (and Worst) Education System in the World, Tech&Learning advisor Yong Zhao, Presidential Chair, Director of Institute of Global and Online Education, College of Education, University of Oregon, takes apart the current culture of assessment.

In 2009, Dr. Beverly Hall, former superintendent of the Atlanta Public Schools, was named America’s National Superintendent of the Year for “representing the ‘best of the best’ in public school leadership.” Hall was hosted in the White House by Secretary of Education Arne Duncan. In 2010, the American Educational Research Association honored her with its Distinguished Community Service Award, which “recognizes exceptional contributions to advancing the use of education research and statistics.” Also in 2010, President Obama appointed Hall to the elite National Board for Education Sciences.

What made Hall a national hero is precisely what brought about her downfall. She earned national recognition by significantly improving tests scores in the Atlanta Public Schools, one of America’s largest urban school districts, and one with a large proportion of minority students. These higher test scores, as it turned out, were not the result of improved student learning, but rather of a conspiracy of teachers and school leaders. Together with Hall, 34 top administrators, principals, and teachers in Atlanta were indicted for “improving” student test results through cheating. The total number of individuals involved in the scandal was even larger—178 principals and teachers at nearly half of Atlanta’s schools were reportedly in on the scam. The case of Beverly Hall is just one of many unfolding national scandals in the United States. Celebrated heroes have been graced with honorary titles and rewarded with generous cash bonuses for dramatically improving test scores—then exposed for “cooking the books.”

In 2012, Lorenzo Garcia, former superintendent of the El Paso Independent School District in Texas, was sentenced to three and a half years in prison for “improving” his schools by preventing low-performing students from taking the state test. Garcia had been nominated twice for Texas Superintendent of the Year.

Michelle Rhee, former chancellor of the Washington, D.C., public schools, was implicated in cheating scandals soon after the district’s dramatic improvement sent her to national stardom—with a prominent spot in the influential documentary “Waiting for Superman,” on the covers of Time and Newsweek, and backed with millions of dollars for her new organization, StudentsFirst.

Cheating scandals have been discovered in almost every major school district that has reported great improvements—Houston, Los Angeles, Philadelphia, and New York. The most obvious victims are the hundreds of thousands of innocent children directly affected by the unethical, immoral, and illegal activities of the adults working in their school systems. But millions more are affected. What about those students, teachers, and school leaders who did not cheat and were adversely affected by their lower test scores? Even the instigators of these cheating scandals are victims. Sure, they may have been driven by greed for the cash prizes and promotions associated with improved test scores (or by the desire to avoid punishment for reporting poor test scores). But it’s unlikely that these people entered the education profession intending to hurt children for their own gains.

The villain behind these cheating scandals is the accountability system itself, which is based on high-stakes testing. Ushered in by President George W. Bush’s No Child Left Behind Act in 2001 and reinforced by President Barack Obama’s Race to the Top initiative in 2009, test-based accountability that directly links student performance to educators’ livelihoods has become the yardstick of American education. By attaching lavish rewards and harsh punishment to student test scores, the system provides powerful incentives for cheating. Educators have far less control over student performance—and far less impact on its quality—than policy makers presume. And that’s especially true for teachers working in impoverished communities.

When it comes to the harm done by high-stakes testing, rampant cheating is just the tip of the iceberg. As Sharon Nichols and David Berliner point out in their book, Collateral Damage: How High-Stakes Testing Corrupts America’s Schools, this “cooking of the books” is but one of many damages done by testing reported by parents, teachers, and researchers. Education historian Diane Ravitch warns in her book, The Death and Life of the Great American School System: How Testing and Choice Are Undermining Education, that high-stakes testing is one of the many symptoms of a virus threatening America’s future.

That virus is the rising tide of authoritarianism in the United States. In exchange for the comfort of knowing how their children are doing academically and that their schools are being held accountable, Americans welcomed high-stakes testing into public education. Without the benefit of historical experience with these kinds of high-stakes tests, however, Americans failed to recognize those benign-looking tests as a Trojan horse— with a dangerous ghost inside. That ghost, authoritarianism, sees education as a way to instill in all students the same knowledge and skills deemed valuable by the authority.

Despite cheating scandals and stressed-out students, America doesn’t seem ready to be rid of its villain. Many Americans still believe standardized tests are needed, and that problems like widespread cheating can be fixed through superficial means. Since the cheating scandals went public, most of the attention has gone to the crimes committed by a few individuals and the technical fixes that would have prevented them—everything from prescribing more severe punishments to increasing testing security and inventing better tests. Political leaders have pushed aside the call to abandon high-stakes testing altogether. Secretary of Education Arne Duncan said that while he was “stunned” by the Atlanta cheating scandal, the problem “is an easy one to fix, with better test security.” Most parents support standardized testing and the use of test scores in teacher evaluation. Even some educators and school leaders support standardized testing. The two largest education unions, the American Federation of Teachers and the National Education Association, both accept standardized testing as part of American education.

Herein lies the tragedy for America—and the reason for my writing this book.

The tale told by Chinese education illustrates the full range of tragic events that can happen under authoritarian rule. As one of the perfect incarnations of authoritarian education, China has produced superior test takers who have maintained a great civilization for millennia— but failed to cultivate talents to defend against Western aggressions backed by modern technology and sciences in the 1800s. Since then, China has struggled to retreat from its tradition of authoritarian education. Although China has already benefited from a gradual withdrawal from central dictation, as evidenced by its recent miraculous economic growth, authoritarianism still rules.

Technical fixes won’t stop the damage and embarrassment of cheating scandals. Reducing the amount of high-stakes standardized testing does little to limit its destructive influence. The damage done by authoritarianism is far greater than the instructional time taken away by testing, the narrowed educational experiences for students, and the demoralization of teachers. The deeper tragedy is the loss of values traditionally celebrated by American education—values that that helped make America the most prosperous and advanced nation in the world. Erase those values, and you lose the creative power of a culture that celebrates diversity and respects individuality. You also lose the time, resources, and opportunities you need if you are to invent a new education that will continue to lead the world.

High-stakes testing is America’s Faustian bargain, made with the devil of authoritarianism. Under the rule of authoritarianism, which gave birth to high-stakes testing in the first place, disrespect of teachers as professional colleagues and intrusion into their professional autonomy are praised as characteristics of no-nonsense, tough leadership with high expectations. Beverly Hall became national Superintendent of the Year for having “demonstrated a commitment to setting high standards for students and school personnel.” That commitment turned out to be authoritarian rule, as a 2012 New York Times report points out: “For years, Beverly L. Hall, the former school superintendent here [in the Atlanta schools], ruled by fear. Principals were told that if state test scores did not go up enough, they would be fired—and 90% of them were removed in the decade of Dr. Hall’s reign.”

To read further, go to: http://goo.gl/KFvAvH