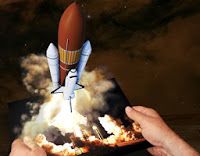 Augmented reality (AR) is a live, direct or indirect, view of a physical, real-world environment whose elements are augmented (or supplemented) by computer-generated sensory input such as sound, video, graphics or GPS data. (Wikipedia) AR has been around for awhile but is really starting to garner interest in the educational community/sector. Using augmented reality is a great way to incorporate 21st century technology into the classroom using different types of apps, sites, and equipment.

Bonus - Drew Minock & Brad Waid are the famous educators of Two Guys and Some iPads and are leading the way into integrating augmented reality into the classrooms.

David Kapuler is an educational consultant with more than 10 years of experience working in the K-12 environment. For more information about his work, contact him at dkapuler@gmail.com and read his blog at cyber-kap.blogspot.com